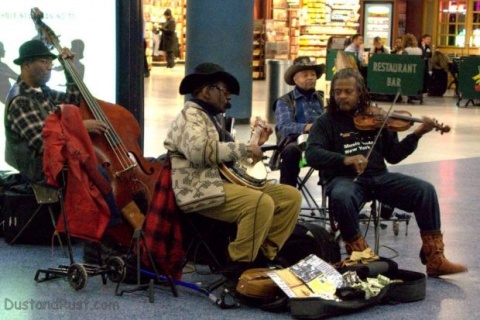 The NYC band Ebony Hillbillies is in Sofia on the invitation of the US Embassy. Photo by dustandust.com

The five musicians of the African American New York City string band Ebony Hillbillies are guitar player  Norris Bennett;  fiddler and cellist Henrique Prince; vocal and bass player William Salters, two-time Grammy winner and composer of "Just the Two of Us," among other hits; Newman Baker on a lap washboard; Gloria Gassaway on bones and vocals.

The group is the only one with a license to perform in the NYC subway, the US Embassy in Sofia, organizer of the concert, informs. A New York subway platform institution since the late 1980s, the Ebony Hillbillies can be found at Times Square, Grand Central Station and 34th Street at Macy's. The have also played at Lincoln Center and Carnegie Hall and for the International Bluegrass Music Association in Nashville. They influenced the formation of the other premier black string band, the Carolina Chocolate Drops.

Ebony Hillbillies are in Bulgaria on the occasion of the African-American month marked in the US in February.

US Ambassador to Sofia, James Warlick, is said to have invited the group and has attended the Wednesday concert.

Ebony Hillbillies will perform in the southern city of Blagoevgrad on February 9 (Wednesday), and at the National Palace of Culture in Sofia on February 10.