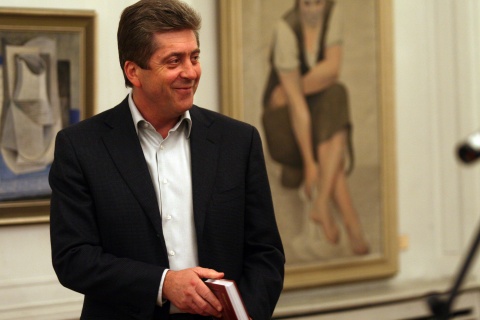 Bulgarian President Georgi Parvanov has denied accusations by PM Boyko Borisov that he plagiarized his sugegstions for amendments to the Academy of Sciences from ruling party GERB. Photo by BGNES

I have no doubt that Dr.Borisov has discovered science, Bulgaria's President Georgi Parvanov mocked PM Boyko Borisov amid war of words over amendments to the Academy of Sciences Act.

"Everybody could make a check with everything I have said and written since 2002. And then maybe it will become clear who plagiarized from whom," Parvanov said as a response to the accusations by Borisov that the president plagiarized the ruling party GERB science development strategy.

Parvanov has stated that archives and records of media keep many of his positions on different topics.

On Monday, the president published on his website an article defending the Bulgarian Academy od Sciences (BAS) and threatening to veto the amendments to the Academy of Sciences Act, proposed by Borisov's GERB party.

The next day, right after meeting representatives of the academy, Borisov announced that his party is withdrawing the amendments and is preparing a new project.

The opposition parties – the Bulgarian Socialist Party (BSP) and the ethnic Turkish Movement for Rights and Freedoms (DPS) announced they are also withdrawing their proposals in order to start work from scratch.

The new group will include MPs from all parties, scientists and businessmen.

Borisov announced a one month deadline for the proposals to be prepared and explained BAS will have a 9-member Board. Two of the members will be the Ministers of Education and Finance, the rest will be from BAS, including former BAS Presidents.

Finance Minister, Simeon Djankov, proposed to ban agents and collaborators of the former Communist State Security (DS) from being appointed to high-ranking positions at the Academy.

Djankov further said priorities for State financing will be given to software development, agriculture and tourism studies.