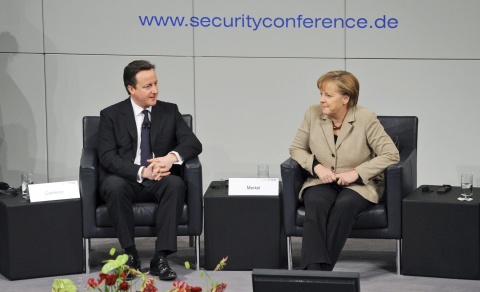 David Cameron has joined Angela Merkel in raising alarm over the failure of Europe's multiculturalism. Photo by EPA/BGNES

UK Prime Minister David Cameron has dealt a heavy blow to the traditional policy of multiculturalism in Western Europe as far as the integration of the Muslim communities is concerned.

In his speech on Saturday at the annual Munich Security Conference, Cameron argued that Europe must stop tolerating the intolerance of Western values within encapsulated Muslim communities and far-right groups on European soil.

In his words, rooting out this opposition to very values that democratic Europe rests upon is the only way to defeat the roots of terrorism.

Cameron argued that governments in Europe have been undeservedly tolerant of some groups of society that publicly oppose democracy or reject equal rights. He said Britain had found that many convicted terrorists had initially been influenced by so-called "nonviolent extremists” - people who are not involved in encouraging plots, but denounce Western politics and culture - before committing acts of violence.

"We won't defeat terrorism simply by the actions we take outside our borders. Europe needs to wake up to what is happening in our own countries… We have even tolerated these segregated communities behaving in ways that run counter to our values… We have encouraged different cultures to live separate lives, apart from each other and the mainstream,” Cameron told the Munich Security Conference.

Cameron said the promotion of multicultural values and a culture of tolerance had allowed both Islamic extremists and far-right extremists to grow strong on European soil.

"We've been too cautious, frankly even fearful, to stand up to them. If we are to defeat this threat, I believe it's time to turn the page on the failed policies of the past. Instead of ignoring this extremist ideology, we — as governments and societies — have got to confront it, in all its forms,” argued the Prime Minister of Britain.

Britain has been criticized for harboring hardline Islamic clerics. Several terrorists involved in attacks or attempted plots in the US, Sweden, Denmark and Norway over the last two years have had links to Britain or clerics living there.

Cameron’s statement comes amidst various reports of terrorist cells plotting attacks in Britain and elsewhere in Europe. He has called for both better integration of young Muslims in European culture, and a more muscular liberalism seeing national identity as resting on democracy, equal rights, rule of law, and freedom of expression.

Cameron’s speech in Munich has resounded a statement made in November 2010 by German Chancellor Angela Merkel, in which she declared the failure of Germany’s “multi-kulti” or  multicultural society most notably with respect to the integration of Muslims and ethnic Turks.