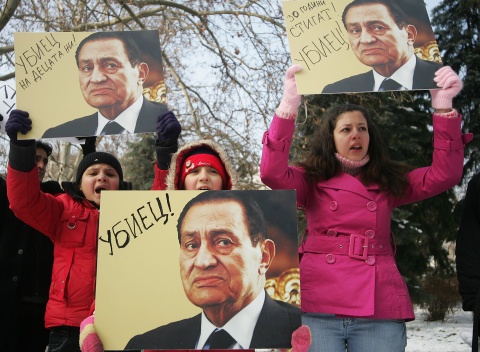 "Mubarak is a Murderer!" and "30 years is enough!" read the posters of Egyptian nationals, who gathered in front of their country's Embassy in Sofia to protest on Thursday February 3 2011. Photo by BGNES

An Egyptian came out in front of their country of origin's Embassy in downtown Sofia to support their compatriots protesting against President Hosni Mubarak.

"Mubarak is a Murderer!" and "30 years is enough!" read the protesters' posters. They were not satisfied with Egyptian President's promise not to run for a new term after September and demanded that he should step out of office immediately.

Meanwhile, the Egyptian army, which has been witnessing the protests in the streets since last Friday, has started to engage in combat action against the suspecter provocateurs from the pro-Mubarak camp as it established a security cordon between the two opposing camps.

Еgyptian Journalist Mohamed Kamal Alam said in an exclusive interview for Novinite.com (Sofia News Agency) that some 15 000 citizens with origin from the Arab countries currently live in Bulgaria.