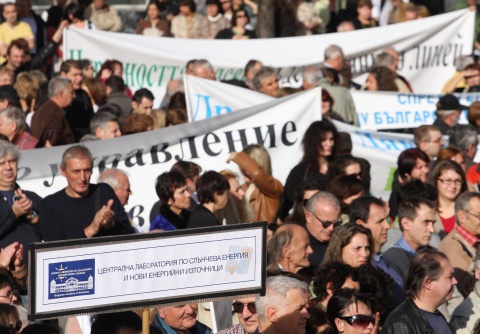 Throughout 2010, the government's policy towards the Bulgarian Academy of Sciences was the cause of some of the most large-scale protests the GERB cabinet has this far seen. Photo by BGNES

The working group that will develop the new bill on the Bulgarian Academy of Science will include one MP from each parliamentary group.

This decision was taken Wednesday by the parliamentary Education and Science Committee in a bid to ensure a consensus legislative proposal.

The prior legislative proposal, tabled by ruling GERB party MP Rumen Stoilov under advice by the cabinet, caused a major uproar not only among researchers, but also among all other parliamentary groups - both opposition and GERB allies - over fears that if adopted it would lead to the dismantling of the Academy.

Tuesday at a meeting of ministers, MPs and BAS representatives, PM Boyko Borisov announced a U-turn in the government's intentions, advising all MPs, including GERB's Stoilov, to retract their legislative proposals in a bid to ensure a consensus decision.

In particular, Borisov vowed that the cabinet had no intentions to split the Academy into institutes under the authority of the Ministry of Education - completely contrary to what he had previously claimed.

Among the main points of innovation agreed to at the Tuesday meeting was the creation of a Board of Trustees overseeing BAS and the institution of a strong parliamentary control over the activities of the Academy.