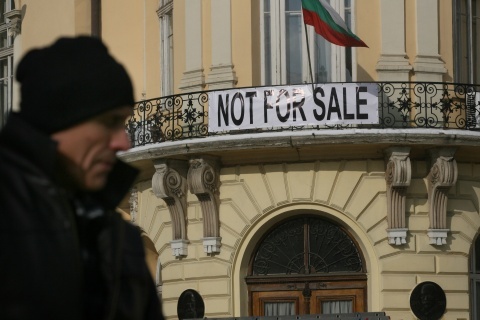 The "Not for Sale" sign has been hanging on the facade of the central building of the Bulgarian Academy of Sciences in downtown Sofia. Photo by BGNES

Bulgaria's Prime Minister, Boyko Borisov, announced Tuesday the cabinet is withdrawing the amendments to the Academy of Sciences Act.

The amendments were proposed by Borisov's ruling Citizens for European Development of Bulgaria (GERB) party and stirred mass discontent and protests at the Academy.

During a meeting with the Parliamentary Education committee, the PM assured the Bulgarian Academy of Sciences (BAS) would not be broken into pieces," but would still have to account before the Parliament.

According to the scrapped amendments, the BAS institutes had to be under the direct supervision and management of the Education Minister.

Borisov was adamant he did not make the decision under pressure from President, Georgi Parvanov.

On Monday, Parvanov published on his website an article defending BAS and threatening to veto the Act.

The PM accused the President of plagiarizing in the said article the GERB science development strategy and plotting to make his veto appear to be the reason for the withdrawal of the Act.

"He rushed to publish this on Monday because he knew we were meeting a day later to discuss th issue," Borisov told researchers and scientists who were also in attendance.

The opposition parties – the Bulgarian Socialist Party (BSP) and the ethnic Turkish Movement for Rights and Freedoms (DPS) announced they are also withdrawing their proposals in order to start work from scratch.

The new group will include MPs from all parties, scientists and businessmen.

Borisov announced a one month deadline for the proposals to be prepared and explained BAS will have a 9-member Board. Two of the members will be the Ministers of Education and Finance, the rest will be from BAS, including former BAS Presidents.

Finance Minister, Simeon Djankov, proposed to ban agents and collaborators of the former Communist State Security (DS) from being appointed to high-ranking positions at the Academy.

Djankov further said priorities for State financing will be given to software development, agriculture and tourism studies.

Regarding the BAS properties, Borisov assured no one was going to take those away and asked the scientist to remove the "Not for Sale" sign that has been hanging for months now above the entrance of the BAS headquarters in downtown Sofia, right next door to the Parliament's building.

The BAS leadership say they are elated by the new developments.