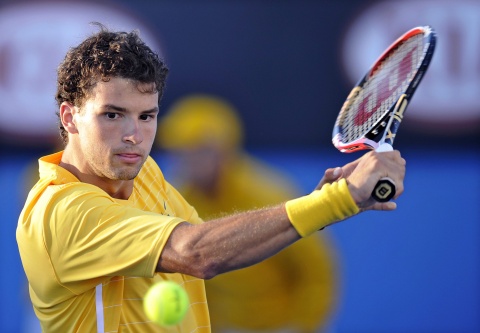 Bulgarian tennis star Grigor Dimitrov has climbed to No.85 in the ATP ranking, which made him the highest ranked Bulgarian male tennis player ever.

He surpassed the previous highest ranking Bulgarian tennis player, Orlin Stanoychev, who climbed to No.96 in 2000. Dimitrov became also the second Bulgarian, after Stanoychev, to advance to the second round of a Grand Slam tournament.

Even though he ranked 106th before the beginning of Australian Open, 19-year-old Grisho won all the qualifications matches and reached the second round, where he was eliminated by Stanislas Wawrinka from Switzerland.

The next match of the Bulgarian tennis star will be at the qualifications of the ABN Amro ATP Tour 500 in Rotterdam, the Netherlands, which begins February 5.

In the meantime, ATP announced its decision to fine him with USD 10,000 and to deprive him of right to play at ATP tournaments for three weeks.

The fine was caused by Dimitrov pushing and insulting umpire Daniel Infanger at the last for 2010 ATP Challenger in Helsinki, Finland.