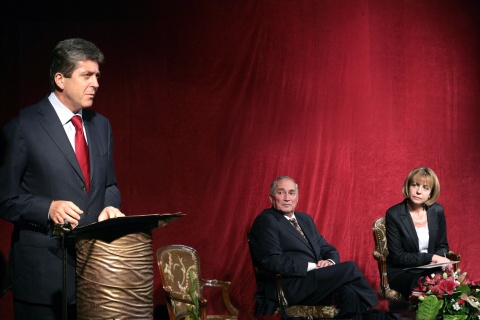 Bulgarian President Georgi Parvanov vowed to veto a controversial bill amending the law on the Bulgarian Academy of Sciences and called for a boost of funding for research.

"If the bill is adopted as it stands, it will in practice lead to the demolition of the Bulgarian Academy of Science. Therfore I declare that if the bill is nevertheless adopted, I will veto it," writes Parvanov in a special article published on the President's website.

The bill, tabled by ruling GERB party MPs and following the suggestions of members of the Cabinet, including PM Boyko Borisov, FinMin Simeon Djankov and Education Minister Sergey Ignatov mandates that the central administration of BAS be removed, and the institutes be transfered under the authority of the Ministry of Education.

Critics have argued that this means that the institutes will be put at the mercy of the powers that be, and that the autonomy of science will be abolished. At the moment, the bill is under discussion at the Education Committee in Parliament.

In the article, Parvanov joined those voices and further argued that Bulgaria needs to develop a serious program for stimulating research and link it to economic development.

"Without investment in science and research, without their becoming a true priority of the state, we will not only be unable to achieve the growth we are looking for, but also we will not manage to emerge from the crisis at all," writes Parvanov.

Regarding the Academy, Parvanov does not deny that it needs further internal reforms, but specifies that they must be made in accordance with academic autonomy and the good traditions of Bulgarian research.

The President's article further enumerates a number of specific measures for stimulating science and research, as well as for forging ties with innovative businesses.

Among them are tax deductions for innovative practices and sponsoring research, boosting state funds for science and salaries for researchers, and a stricter internal control on academic performance.