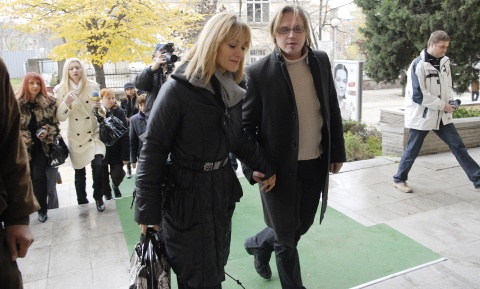 [3:29:11 PM] Maria Guineva: Albena and Maxim walk hand in hand to the courtroom where the skating champion faced trial for causing a fatal accident over DUI. Photo by BGNES

The 3.25 kg and 51 cm boy appeared at 10 am and was delivered by a Caesarian operation by Dr. Mazneykova.

Father, Maxim Staviiski, and Albena's sister have been present at the time of the delivery.

Staviiski became a father three years after he killed a man and left a young woman comatose in a crash, caused by drunken driving.

The deadly crash occurred in August 2007 after Maxim Staviiski, at the wheel of his Hummer vehicle, veered into the opposite lane on a bridge over the Ropotamo River near the coastal city of Burgas, crashing headlong into another car with four people riding in it.

The driver was killed, while one of his passengers - 18-year-old Manuela Gorsova is still in coma.
Staviiski pleaded guilty to drunken driving and received a 2.5 year suspended sentence, with probation of 5 years, in addition to a four-year driving ban.

Albena has said before Maxim was following closely the condition of Manuela, but has not seen hersince the crash, because it would have been very inappropriate.