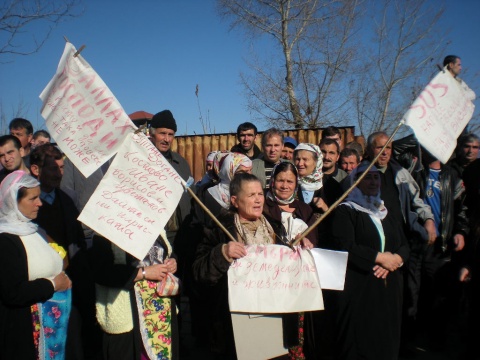 Bulgarian tobacco growers threaten to block the border with Greece in sign of protest. Photo by BGNES

About one thousand tobacco growers gathered in the village of Hadzhidimovo, near the southern town of Gotse Delchev Saturday, to protest against the low buy-up prices for their production.

The demonstrators are headed to the Ilinden cross border point with Greece with the intentions to stage a blockade, the Bulgarian National Radio (BNR) reports.

The tobacco growers demand that the State adheres to the referent period it signed with them, without basing payments on the conditions tied with budget 2011. They say the buy-up price now is extremely low – BGN 4 per kg on average, and asked the cabinet to interfere in the process to bring this price up to BGN 8 per kg, the minimum need for them to recuperate investments and have funds left for the new crop.

For decades, Bulgarian tobacco regions, populated mostly by Bulgarian Muslims, have produced only tobacco and nothing else, leaving the farmers stranded with no alternative. For this reason they are asking the Agriculture Ministry to set conditions for growing vegetables and guarantee their sales.

Organizers insist the rallies are not politically motivated and the ethnic Turkish Movement for Rights and Freedoms (DPS) has nothing to do with them.

Meanwhile, Nedzhim Ali, a DPS Member of the Parliament, announced his colleagues are anticipating the Monday decision about paying subsidies to tobacco growers, adding as early as the passing of budget 2011, they have warned about looming large-scale protests.

Ali further vowed the party will insist on a cabinet decree about the amount to be paid to tobacco growers with the cap being BGN 143 M.