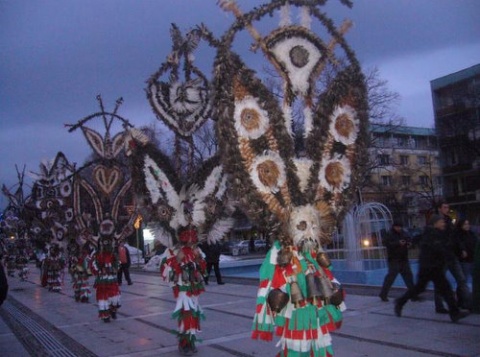 Bularia's largest "Kukeri"event - the Surva Festival (20th edition) started in the city of Pernik on Friday drawing together thousands of mummers. Photo by Surva.org

The 20th edition of Bulgaria's largest and most impressive "Kukeri" event – the Surva Festival – kicked off in the western city of Pernik on Friday.

Thousands of "kukeri", or mummers, a beloved Bulgarian folklore tradition with roots from Ancient Thrace, have gathered in Pernik for the three-day event.

Almost 100 folklore groups are taking part in the carnival games of the 2011 edition of the Surva Festival, including international participants from as far away as Spain, Ukraine, and Pakistan.

Henry Van Der Kroon, President of the Federation of European Carnival Cities, Bulgarian President Parvanov who is a native of Pernik, and Deputy Minister in charge of tourism Ivo Marinov attended the opening of the Festival together with Pernik mayor Rositsa Yanakieva.

Tanya Bakalova, a representative of UNESCO, has announced that the kukeri tradition and the Surva Festival in Pernik will be included in UNESCO’s list of protected non-material cultural heritage once the respective procedure is completed.