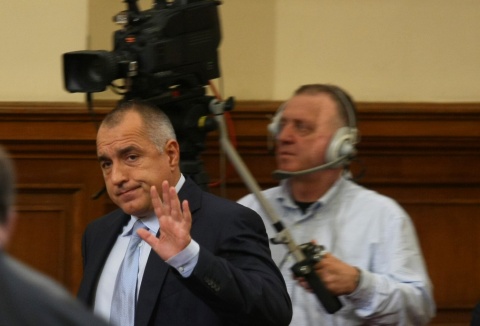 Bulgaria's Prime Minister Boyko Borisov during the confidence vote demanded by him as a result of the recent spying scandal. Photo by BGNES

Bulgaria's Prime Minister Boyko Borisov "saluted" the recent performances of Alexey Petrov, a controversial figure considered to be his archenemy.

"I bow before Alexey Petrov, who with the help of a couple of journalists took over the whole Bulgarian media," Borisov said on Friday before the Bulgarian TV 7, referring to the recent scandal with leaked tapes of discrediting conversations between senior officials, including Borisov, which affected the public confidence in his rule.

The conversations were published and distributed by the Galeria weekly tabloid, which is believed to be Alexey Petrov's mouthpiece.

Alexey Petrov is a notorious businessman, ex-secret agent and suspected crime boss, who has announced he will run for president in the autumn this year. Petrov has unclear ties to the notorious Order, Lawfullness and Justice (RZS) party headed by Yane Yanev, and Petrov is expected to become a formal RZS member in the near future.

On Wednesday, Galeria released its most recent taped recordings, in which Boyko Borisov and the Director of the Customs Agency, Vanyo Tanov, were allegedly involved in a discrediting conversation.

Prior to that, three tapes of discrediting conversations between the Director of the Customs Agency, Vanyo Tanov, and his superiors – Finance Minister Simeon Djankov and Deputy Finance Minister Vladislav Goranov. Borisov has declared on several occasions that the tapes have been manipulated.

"As a gentleman, I have to admit he is manipulating everybody pretty well," the Bulgarian Prime Minister stated, explaining that the oppositional Bulgarian Socialist Party has been constantly taken in by Petrov's fake recordings.

"It is President Georgi Parvanov who is behind the plot against me and I understand that. He is young and willing to stay in power," Borisov said, clarifying that the Bulgarian President has further political ambitions after his second term.