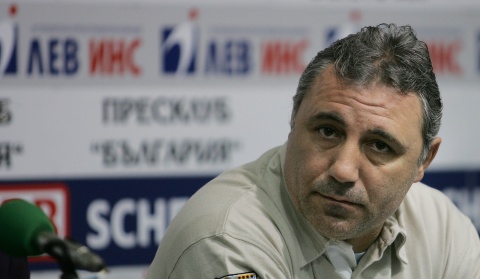 According to reports in the Bulgarian media, football legend Hristo Stoichkov will continue his coaching career in India. Photo by BGNES

Bulgarian football legend, Hristo Stoichkov, will coach local teams in India, according to reports in the Bulgarian media.

The Bulgarian daily "24 Chasa" reported that India's local football federation has announced that it attracted as a partner Stoichkov's Catalan team (Barcelona). Other teas that will be partners are Milan and Glasgow Rangers.

The Bulgarian legend is expected to visit soon India's national training camp for young talents and his teams are expected to go for tournaments there. At present, he has two training camps in Spain and one in Bulgaria.

Stoichkov is one of the most popular football players in India since the time when he played for Barcelona FC. He is currently unemployed but is expecting to be employed by Barcelona FC soon.

According to the information in the Bulgarian media, he will probably be responsible for all training camps of the Catalan team abroad.

Stoichkov last worked as a coach at the South African team Mamelodi Sundowns. He is the most internationally renowned Bulgarian footballer, a winner of the World Cup Golden Boot and the Golden Ball, both in 1994.

He played for Barcelona FC in 1990-1995 as part of Johan Cruyff's 'Dream Team'. His record as a coach has not been very distinguished so far, even though he coached Bulgaria in 2004-2007.