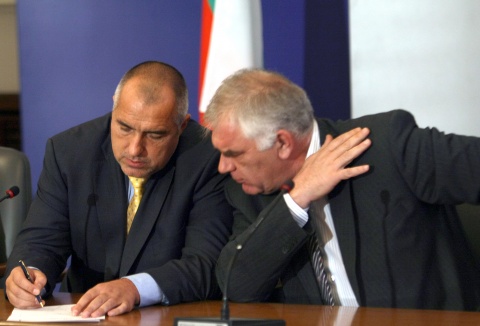 Transcript from the phone conversation between the Director of the Bulgarian Customs Agency, Vanyo Tanov, and the Sofia Airport Customs Head, Pavel Manchenko.

The transcript is part of the new series of discrediting phone conversations between Tanov and Prime Minister, Boyko Borisov. The tapes have been released in tranches all through January by the Galeria weekly, a paper believed to be the mouthpiece of Aleksei Petrov, former special agent of the State National Security Agency DANS, (currently under house arrest), who has been investigated on organized crime charges since his detention in the much advertised "Operation Octopus" in February 2010.

According to one of the tapes, Borisov instructs Tanov to make sure that Nikolay Vuchev, a friend of his, with whom he often plays football, is brought back to work at Terminal 2 at Sofia airport.

PM: Hello, I am listening.

VT: Manchenko, hi. This is Tanov.

PM: I am listening. Good evening.

VT: Is it too late to call?

VT: Do you have a person there, Nikolay Metodiev Vuchev?

VT: Where did you move him?

PM: I think he is from TELK. (Commission dealing with retirement and work conditions for the sick and the disabled.) He is somewhere in the building; I have no recollection... There are 16 of them. He is either with (cannot be heart, some abbreviation) or somewhere else. What should we do with him?

PM: Laughs. Is this so?! Well, the guy is a football player.

VT: Yeah, but where was he before?

PM: He was at the passenger terminal. Terminal 2.

VT: Well, we must bring him back to Terminal 2.

PM: We will on Monday.

BB: Yes?
VT: He will be transferred back there on Monday.

BB: OK, thanks a lot; thank you very much. See you.

At an earlier press conference, Galeria released a tape of a conversation between the Prime Minister and the Customs Director, alleging Borisov provided a cover-up for the owner of the "Ledenika" beer company, Mihail Mihov.

Strandzhev insist the recordings are true and he had such phone conversation with his former boss.

An investigation into the authenticity of the tapes is currently underway.