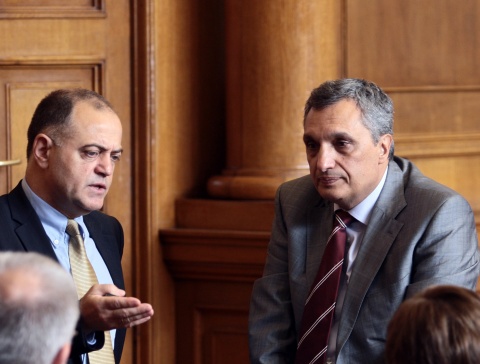 The leader of DSB, Ivan Kostov (r), and leader of the DSB Sofia branch, Atanas Atanasov (l), say the announcement of the truth is the only way to stop the spying scandal, raging in the country. Photo by BGNES

The two have insisted that the Prosecutor's Office releases as fast as possible the evidence in the case along with information of violations of the law in collecting, processing, safekeeping, and sending to the prosecutor in a particular case results from the use of special surveillance devices.

They say the announcement of the truth is the only way to stop the scandal.

Earlier Tuesday, in an interview for the TV channel Nova Televizia, Atanasov stated President, Georgi Parvanov, is the real instigator of the scandal surrounding the Customs probe, pointing out Parvanov's week-long silence on the subject, followed by the dismissal of the Head of his legal department, Sasho Penov.

Penov was let go after it became clear he was the court attorney for the Ledenika beer company in the case of the latter's suspended license.

The scandalous tapes in question were published on January 14 by the Galeria weekly, a paper believed to be the mouthpiece of the former special agent of the State Agency for National Security, DANS, Aleksei Petrov, (currently under house arrest), who has been investigated on organized crime charges since his detention in the much advertised "Operation Octopus" in February 2010.

The recordings, which authenticity is yet to be proven, allege Borisov provided a cover-up for the owner of the "Ledenika" beer company, Mihail Mihov, on Parvanov's request.