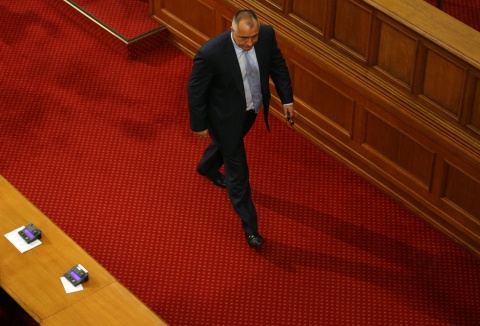 Thursday PM Boyko Borisov's cabinet won a confidence vote in Parliament, after a record of an alleged conversation in which the PM himself appears to abuse power was leaked. Photo by BGNES

The image of the Bulgarian state has suffered a serious blow both domestically and internationally by the recent leaked secret tapes scandal, according to German political analyst Johanna Deimel.

"What is most worrisome is that PM Boyko Borisov thinks that special tapping is completely in order and that it is up to him to decide who is to be surveilled," commented Deimel regarding the recent surge of leaked secret tapes recording conversations among senior state officials in Bulgaria.

Speaking in an interview for Deutsche Welle Bulgaria, Deimel also expressed her low opinion of Thursday's confidence vote tabled to Parliament and won by Borisov's cabinet.

"Looking at what happened in Parliament, Bulgarian citizens can hardly be thinking that democracy in the country is doing well," said the German analyst regarding the brawls and technical difficulties during the vote of confidence debate.

Deimel, who is a deputy director of the Southeast Europe Association (S?dosteuropa-Gesellschaft), laid special stress on the fact that the secred surveillance underway in Bulgaria is infringing not only specific legislation, but also the principles of constitutional democracy.

"If I were a Bulgarian citizen I would be asking myself in what era I live. Do I live in democratic Bulgaria which is an EU member, or have I gone back to the times of communism, when spying was part of everyday life?" said Deimel.

She also added that what is going on in the country can hardly be helping to boost its international image, especially in the context of Bulgaria's bid to join the Schengen Area as soon as possible, preferrably by March.