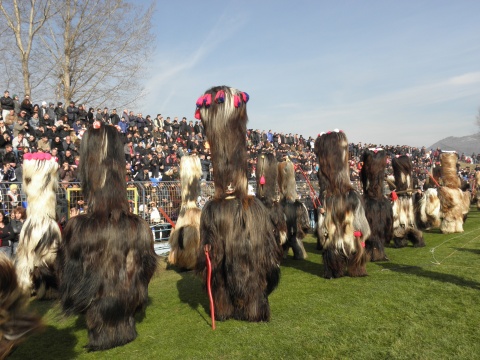 2000 kukeri, or mummers got together for the traditional festival in Simitli. Photo by BGNES

The small southwestern town of Simitli hosted Saturday a huge festival of "kukeri", or mummers, a beloved Bulgarian folklore tradition with roots from Ancient Thrace.

Over 2000 kukeri from a total of 15 groups Southwestern Bulgaria - from Blagoevgrad, Petrich, Kyustendil – as well as from Karlovo in central Bulgaria and from the town of Berovo in Macedonia – gathered in Simitli for the traditional dances.

They attracted some 10 000 spectators - more than the actual population of the town.

The youngest mummer was a one-year-old kid, and the oldest – an 85-year-old man.

In Southwestern Bulgaria the mummers, or kukeri, are also known as "babugeri".

The kukeri tradition is performed all over Bulgaria; one of the most famous performance is the Surva Festival in the city of Pernik, to the west of Sofia. Mummers aged from 1 to 85 gathered in Simitli Saturday. Photo by BGNES