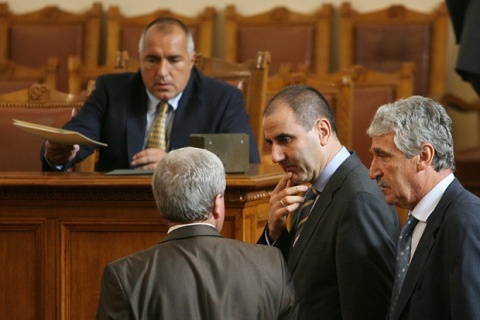 Bulgaria's Prime Minister, Boyko Borisov, says he has nothing to be ashamed of. Photo by BGNES

Bulgaria's Prime Minister, Boyko Borisov, told the Members of the Parliament Friday he was convinced the recordings of his conversation with the Director of the Customs Agency, Vanyo Tanov, were manipulated.

"There is nothing I must be ashamed off and that I need to prove with all my actions," Borisov said in plenary hall Friday, after the opposition Bulgarian Socialist Party (BSP) prompted him several times to give explanations, which interrupted the debate about Bulgaria's readiness to join the Schengen zone.

The PM, however, declined to offer more details, saying he would comment only after the prosecutor makes official announcements if the tapes are authentic or not, adding the only thing he ever demanded from his subordinates was for them to do their jobs.

Borisov did offer some clarifications on how the tapes could have been manipulated explaining the Deputy-Editor-in-Chief of Galeria, Yavor Dachkov, had called him at 10 pm Thursday night and talked to him, for 10 minutes, about the Interior and Finance Ministers.

"They obviously lacked some sentences they needed to incorporate," the PM pointed out.

"This is it," Borisov ended.