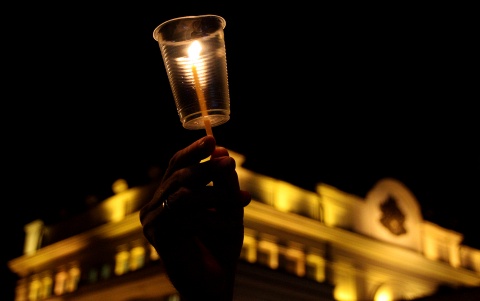 Last year. Bulgarian scientists staged many protests against the government's policy towards the Bulgarian Academy of Sciences. Photo by BGNES

Bulgarian scientists face a bleak future, while Romanians' prospects improve, according to Nature, one of the world's most prestigious scientific journals.

The journal has published an article comparing the situation with scientists and researchers from the two countries.

"Four years [after they joined the EU], these neighboring cash-strapped countries on the southeastern edge of the EU remain close neighbors at the bottom of the EU league tables of research expenditure and research output statistics. But their scientific fates may be set to diverge dramatically," the article said.

Bulgaria, who slashed the 2010 budget for the National Academy of Sciences by 38%, is compared to Romania who has trimmed the funding of the Romanian Academy by only 3% and has increased the budget of its granting agency by 44%.

"Romanian scientists working outside the country say that the changes give them hope of some day being able to continue their research careers back home. Meanwhile, the Bulgarian diaspora despairs," the article said.

According to Nature, the access to outside money and expertise that the EU has provided to the two countries is not enough if they lack national political will for a successful scientific transformation.

However, the article expressed the hope for possible improvement of the situation in Romania, but not for Bulgaria.

"Unlike Bulgaria, Romania is continuing to bolster its research infrastructure, using EU structural funds for regional development," the article said.