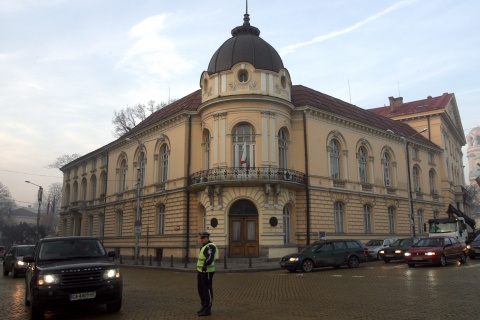 The building of the Bulgarian Academy of Sciences in Sofia. Photo by BGNES

When Bulgaria and Romania joined the European Union (EU) in 2007, ambitious scientists there hoped that it would swiftly disperse the lingering legacies of 40 years of communist rule. Science had been blighted by a lack of competition, minimal funding and an old guard so desperate to cling on to its privileges that fresh blood was denied the opportunity to build a research career.

Four years later, these neighbouring cash-strapped countries on the southeastern edge of the EU remain close neighbours at the bottom of EU league tables of research expenditure and research output statistics. But their scientific fates may be set to diverge dramatically.

Last year, Bulgaria slashed the budget of its Academy of Sciences by 38% to 75 million leva (US million), forcing some scientists to take unpaid leave. It reportedly reduced the budget of its granting agency by more than half, and will maintain those funding levels in 2011. It is also poised to make organizational changes that scientists fear will foster mediocrity.

Over the same period, Romania has trimmed funding of the Romanian Academy by just 3%, and increased the budget of its granting agency by 44% to 1.5 billion lei (US###content###.5 billion). In a drive to improve the standard of Romanian science, the government last week approved a hard-won law that enforces strict quality control on universities and introduces tough rules for funding evaluation and peer review.

Romanian scientists working outside the country say that the changes give them hope of some day being able to continue their research careers back home. Meanwhile, the Bulgarian diaspora despairs.

These opposing outlooks show how joining the EU does not guarantee a successful scientific transformation, despite the access it offers to outside money and expertise, and the EU's focus on innovation. For science to flourish, national political will is crucial.

A tale of two countries

After Bulgaria and Romania became democracies in 1990, both attempted to reform their research organizations and universities along Western lines. Early on in the process, they gave autonomy to their respective scientific academies, learned societies that also run extensive networks of research institutes and that were under state control in Soviet times. But little reform accompanied that autonomy, a matter of political concern for many years.

In November 2010, the Bulgarian science and education minister, Sergei Ignatov, proposed an amendment to the law governing the Bulgarian Academy of Sciences (BAS) that would bring its institutes back under the control of the ministry, with each institute funded separately, leaving the academy as a learned society. The amendment, expected to be approved in the next month or so, does not outline how the ministry would safeguard the scientific objectives of the institutes. Scientists fear that the institutes will be closed or deprived of the opportunity to do internationally relevant research.

Enraged BAS scientists were already reeling from the 38% annual budget cut, part of a government-wide austerity programme, which targeted science in particular. They took to the streets in weekly demonstrations, and have since launched an online petition, which has been signed by more than 7,000 scientists around the world, including eight Nobel laureates and five recipients of the mathematics Fields Medal. Peter Gruss, president of Germany's Max Planck Society, has written directly to the BAS president offering moral support.

"I worry most about keeping our young scientists," says Tsvetan Dachev, a space scientist at the BAS Space and Solar-Terrestrial Research Institute in Sofia. "They earn just ?175 [US7] a month, not enough to live on." Last year, 670 scientists left the academy and were not replaced — 460 retired and most of the rest were young scientists who no longer see a future there.

Things are not much better at Bulgaria's universities, which will see an overall budget cut of 21% to ?170 million this year compared with 2009. The large and research-intensive University of Sofia — which alone generates 30% of Bulgaria's scientific papers and patents — has to cope with a 23% cut in its 2009 budget to ?18 million. "This is creating tensions between faculties, which are now fighting over tightened resources, and it's not pleasant," says Georgi Vayssilov, a chemist at Sofia. "Faculties such as chemistry and physics need more money for teaching, but our income is based on student number, so we are suffering a lot."

Vayssilov, like most of his colleagues, is also concerned about a law approved last month that allows universities to make their own rules for academic appointments and offers no guidelines or criteria. Consequently, one university might only appoint professors with strong publication lists, he says, whereas another might decide a couple of negligible publications would suffice, opening the door to cronyism.

Meanwhile, the country's granting agency, the National Science Fund, put out no general calls for proposals last year, and funding of some ongoing projects has been stopped or reduced. No new calls are expected this year.

Until recently, scientists in Romania were in similar despair. In 2008, the country slipped into recession, and the unstable coalition government slashed the 2009 research budget by nearly 50%. But the next coalition government, which came into power at the end of that year, took a different view: a huge budget hike this year comes close to returning research spending to 2008 levels. Unlike Bulgaria, Romania is continuing to bolster its research infrastructure, using EU structural funds for regional development.

Crucially, the country is introducing legislation to ensure the new funding is spent well. Research and education minister Daniel Funeriu, a former research chemist who spent most of his adult life abroad, championed an extensive and detailed education law that brings nearly all aspects of university governance, academic hiring practices, evaluation and guidelines for good scientific practice — complete with penalties for academic misdemeanours — into line with other European countries.

The law expressly forbids nepotistic appointments, and also bars rectors from concurrently holding other positions of power that may pose a conflict of interest, such as being a member of parliament. "If these things didn't happen, we wouldn't have had to write them into the law," says Funeriu.

The draft law met huge resistance in parliament, in large part owing to the influence of several members who are also university rectors. The parliamentary education committee was particularly offended by a paragraph stating that the first round of quality assessment for universities must be done by foreign scientists. In the end, the government decided to force the bill through parliament with a vote of confidence, bypassing some of the parliamentary procedures that were blocking it. After being endorsed by the country's constitutional court on 4 January, the bill became law.

The government is now launching schemes to bring Romanian science into the international arena. In 2010 the country became a full member of CERN, the European particle-physics facility near Geneva, Switzerland, and also became a founding member of two major European facilities: the Extreme Light Infrastructure, which will develop the world's most intense lasers to study matter at high energies, and the particle accelerator Facility for Antiproton and Ion Research in Darmstadt, Germany. This year it is also planning to launch a twinning scheme, which would allow scientists working abroad to set up a parallel lab in Romania. That way they could contribute to science in Romania without having to risk leaving a good job elsewhere; and local staff would benefit from greater contact with international science.

Funeriu says that it has been a hard fight to get to this stage, but he is now optimistic for the future of Romanian science. "Winning this battle was tougher than any chemical synthesis I have done," he says.