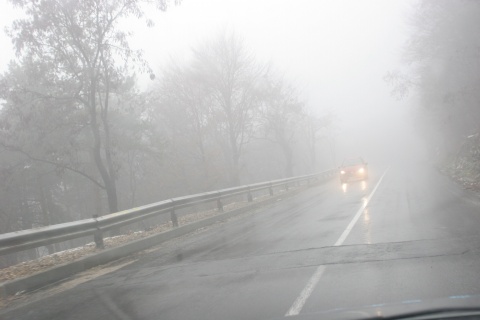 Visibility is expected to improve in the afternoon, but drivers have been warned to be extra careful. Photo by BGNES

Bulgaria has been covered by a blanket of fog for the second day, disrupting traffic on the roads and plans of air travelers.

Visibility is expected to improve in the afternoon, but drivers have been warned to be extra careful.

Bulgaria's Sofia International Airport has not yet started operating normally after it stopped working on Monday due to the heavy fog.

Flights departing for Munich and Vienna have been canceled, while those flying to Amsterdam and Madrid will take off at about noon.

All incoming flights arrive behind schedule.

Earlier on Monday, The "Easy Jet" flight from Manchester was redirected to Thessaloniki while those of "Lufthansa" from Munich and Frankfurt were redirected to Belgrade.

Flights of "Bulgaria Air" and "Alitalia" from Rome were sent to Plovdiv along with the "British Airways" and "American Airlines" flights from London.