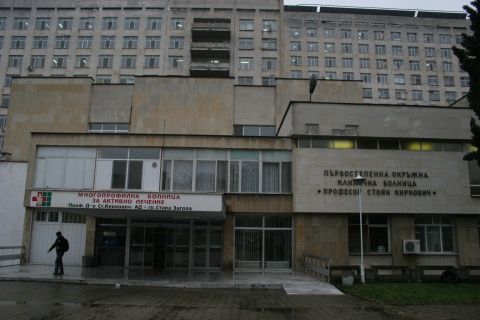 The Stara Zagora hospital has had to shut several other wards to make additional room for hepatitis patients. Photo by BGNES

As the number of hepatitis A cases in Southeastern Bulgaria grew in the past couple of days, the government has declared there was no need to “dramatize” the situation.

On Wednesday, Bulgaria’s Health Minister Stefan Konstantinov announced the exact number of hepatitis cases – 142 in Stara Zagora, 26 in Kazanlak, 16 in Chirpan, 15 in Galabovo.

Konstantinov says only the Stara Zagora municipality has an “epidemic situation” but the people who have the virus actually got infected a month ago.

The health authorities are investigating the cause of the hepatitis outbreak, and the minister believes there are no reasons to worry.

His statements come as local hospital directors expressed worries over the lack of a sufficient number of beds to hospitalize all patients as well as over insufficient funding on part of the National Health Insurance Fund.

On Wednesday, the minister said the Fund has got to subsidize the budgets of the hospitals to help them meet their new expenses.

Most of those infected are men aged between 20 and 40; they include a director of a bank branch, a German specialist working at the Maritsa East thermal power plant complex, several doctors and engineers.

There have been suspicions that the infection started in the Maritsa East complex since 12% of those infected – including the people who were infected first – work there.