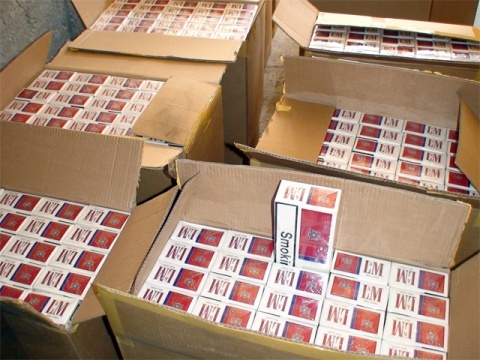 While cigarette contraband is skyrocketing, Bulgaria's Customs announce they have detained five times more smuggled cigarettes in 2010 than they did in 2007, 2008, and 2009 combined. Photo by Customs Agency

The cigarette contraband in Bulgaria has reached over 34% in 2010, according to a study of the tobacco giant Philip Morris International, cited by the Bulgarian daily "Trud."

The study has been done in 21 Bulgarian cities and 4 towns from May 15 to the 31st. Experts collected nearly 6 000 empty cigarette boxes from trash containers and examined them.

In the city of Shumen, contraband cigarettes in 2010 were 9 times more compared to 2009; 3 times more in the cities of Ruse and Pazardzhik.

This data ranks Bulgaria third in the EU by the percentage of contraband cigarettes. Latvia (43%) is first and Lithuania (42%) is second.

Meanwhile, former Interior Minister and current Member of the Parliament from the opposition Bulgaria Socialist Party (BSP), Rumen Petkov, said Tuesday the government is involved in cigarette contraband, which was the main reason for the delay in Bulgaria's joining of the Schengen zone.

"These illegal shipments pass through the cross-border check points, not through the fields," Petkov says.

According to the former Minister, there is no way illegal cigarettes import can reach 40% - 45% without the "help" of the police, the border police, and the Customs Agency, adding the smuggling has deprived the State budget by nearly BGN 1 B,