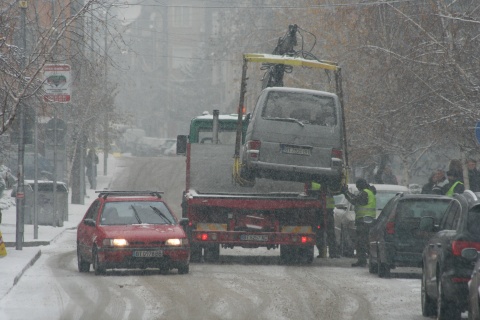 A total of 775 Bulgarians perished in road accidents in 2010. Photo by BGNES

In 2010, 775 Bulgarians lost their lives in car crashes and other road accidents – the lowest number since 1960.

The number is substantially smaller compared with 2009, when 895 people perished in what has been dubbed Bulgaria's war on wheels, announced Monday Commissar Aleksi Stratiev from the Bulgarian police.

At the same time, the number of people who got injured is down by 600 compared with 2009.

"This drop in the number of deaths is unique, and we have not had this few deaths in 50 years when the number of cars was 10 times smaller. Everybody remembers the crisis years in 1995-1997 when we registered over 900 deaths annually. This change can well be pronounced to be the event of 2010," Commissar Stratiev told BNR.

The decrease in the death rate in traffic accidents has been a trend since 2008.

A total of 21 773 lost their lives in Bulgarian road accidents in 1990-2009, with 168 007 injured. About one third of those who suffered serious injuries remained disabled for life. About 25% of the casualties were under 24 years of age.