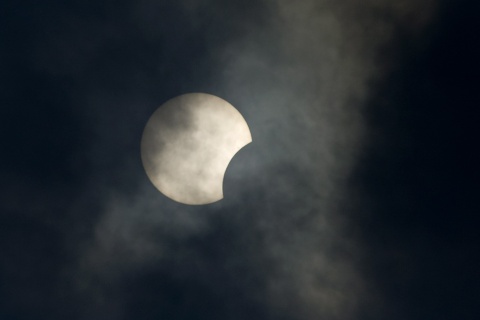 A view of a partial solar eclipse partially visible due to the presence of dark clouds in Kuala Lumpur, Malaysia, 15 January 2010. Photo by EPA/BGNES

Bulgarian skygazers will be treated Tuesday morning to the rare spectacle of a partial eclipse of the sun, which will be the first and the last for this year.

The partial eclipse will be visible from the territory of the country from 7.57 am, while three hours later a total of 86% of the sun's diameter will be covered.

The eclipse of the sun will be widely visible across Europe and as far east as India, but not in North and South America.

At maximum, the eclipse will be at the horizon at sunrise in England, with 75% and then gradually emerge over the next hour and 20 minutes. In Paris or Berlin, 80% of the sun will be covered near sunrise.

This will be the only partial eclipse, which will be visible from the territory of Bulgaria for this year. The citizens of the capital Sofia will have a chance to enjoy "the real thing" - a total eclipse of the sun – on September 3, 2081.