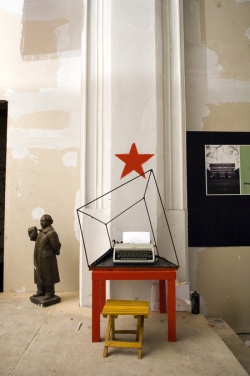 A part of the youngsters' exhibition.

Communism, as imagined by those who are too young to remember it – this was the focus of a temporary museum installation in Bulgaria December 16-20.

Art installations, performances and exhibitions wеre staged by young Bulgarian artists at a temporary museum in an old communist-era building in downtown Sofia under the title "Living SOC", referring to the youth slang term for the socialistic era.

The peculiar artifacts produced by the young artists included a life-size cardboard cutout of Joseph Stalin and masks of China's former communist dictator Mao Zedong and Cuba's Fidel Castro, together with Bulgarian household utilities from the communist period.

"Our idea is to poke fun at this particular period," the event's organizers explained, stating that they do not have any political agenda.

"It is anti-political. It's how today's anti-generation perceives the political regime of yesterday," according to their manifesto.

According to the young artist, the event has offered a light-hearted antidote to the latest political scandal in Bulgaria, where it was revealed that nearly half of Bulgaria's representatives in foreign diplomatic missions have collaborated to the communist State Security during that era.