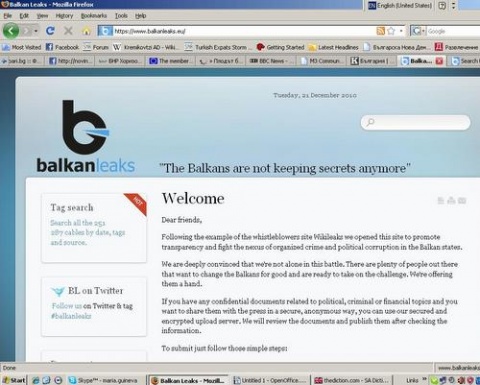 The newly launched Bulgarian site Balkanleaks is now boasting a new and unique search engine allowing users to look up the still unpublished by WikiLeaks US diplomatic cables.

The clever tool, as many call it, can be found at http://balkanleaks.eu/cmtool.html.

It alows to search among the tags of the entire huge volume of documentation and then guess the content of the cables.

For example a cable with tags such as #UNESCO, #Bulgaria, #Egypt would definitely involve Irina Bokova's election as UNESCO Secretary General, the creators explain.

Consequently, without knowing the exact content of a particular cable, those interested to know more and in advance, would be able to speculate what is inside.

A total of 821 cables have been sent from the American Embassy in Sofia on different topics. Only 3 have been released so far.

Balkanleaks further explain that if one decides to play with some combinations, the result can be very interesting and give an example with a cable sent by the US Embassy in Sofia on February 22 with the following tags - PREL, PARM, CH, EUN, BU suggesting the content might be related to EU talks on limiting military technology exports to China or export of weapons from Bulgaria to Beijing.

There have also been 5 cables with tags about Bulgaria sent from the US Embassy in Moscow involving energy matters, international relations and OCCE. One of them has content related to sovereignty and borders, so the guess is it could be about Macedonia or Kosovo.

The search can be done by entering the entire tag name or its abbreviation in the search field (the tool offers a list with all abbreviations under "browse by tag").

For example, when entering PHUM or Human rights and Bulgaria, 9 pages appear.

There is a cable, dated June 19, 2009 with tags #Internal Governmental Affairs (PGOV) #Human Rights (PHUM) # (KPAO) #Internet Administration (AINT) #Bulgaria (BU) #Secret Internet Protocol Distribution (SIPDIS) – the last one being the acronym of the system for information sharing and distribution among different US federal institutions.

When tags Bulgaria, Energy and IAEA International Atomic Energy Agency are entered, 4 cables appear – the one just released by the Guardian Tuesday and 3 more on the same topic.

Balkanleaks appeal to all to use the tool and share things they have discovered, giving as example a cable dated November 12, 2008. It does not have tags about Bulgaria but the ones such as #Visits and Travel of Prominent Individuals and Leaders (OVIP) and #Uzbekistan (UZ) suggest the content might be related to the infamous visit of Bulgarian President, Georgi Parvanov, there.

The visit is mostly remembered by allegations when in the Central Asian State, the President shot and killed a protected specie during a hunting trip organized by the hosts.

Parvanov fully denies the allegations, but many harbor strong doubts about his honesty while the truth is yet to be revealed to the Bulgarian public.