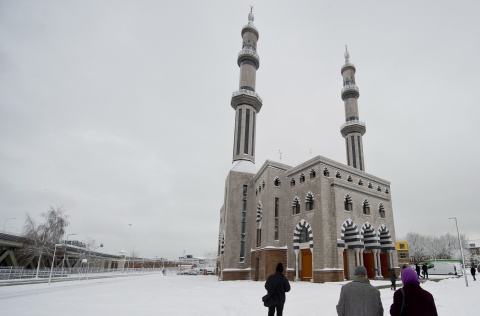 The biggest mosque in the Netherlands opened doors on Friday. Photo by EPA/BGNES

The mosque was officially opened by Rotterdam Mayor Ahmed Aboutaleb and Alderman Hamit Karakus (Housing and Town Planning) of the Rotterdam municipality. They, respectively Moroccan and Turkish, are Muslims themselves. Among the invited guests were the ambassadors of Dubai and Morocco, reported the Dutch English-language media NIS News.

The construction of the Essalam mosque, which offers space for 1 500 Muslims, took seven years and cost EUR 4 M.

The new mosque, built in a traditional style with 50-meter minarets, is the biggest Islamic house of prayer in the Netherlands and one of the biggest in Western Europe.

The construction of the mosque did not go without trouble over concerns of the foreign funding much of which came from the Maktoum Charity Foundation of Dubai sheikh Hamad bih Rashid al-Maktoum, who also has placed his followers on the mosque management board.

Much opposition to the building existed in the years past, among others among the local population. Construction was halted for months several times.

Rotterdam city council threatened to withdraw the building permit, mainly under pressure from Liveable Rotterdam, the biggest party among white Rotterdammers. As well, a portion of the Moroccan Muslims who would make use of the mosque did not want the intervention from Dubai, NIS News points out.