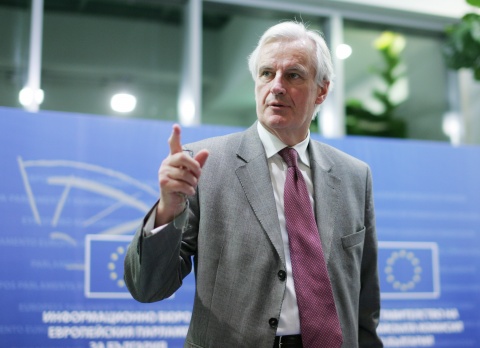 The EU is preparing to hold a new round of bank stress tests. What will be the difference with the previous round? Are there lessons that have been learned and things that will be corrected in the new stress test?

The stress test results published earlier this year were actually a second series of stress tests. And actually there was a serious progress compared with the first round because this time we tested the sovereign debt, expanded the number of the tested banks and published the results.

So there was progress from the first to the second round of stress tests. Therefore, in light of what we already have achieved, I believe we should continue with such tests for the stability of banking system and of specific banks as a whole so that we can benefit from that.

There has been the issue of holding liquidity tests. We will now be testing the banks' liquidity. That is a very serious and complex question. So in order to see how things are going, we need to hold a new round of tests, and we also need to follow the situation in other parts of the world, especially in the USA.

Why did the Irish banking system end up needing a bailout package even though the Irish banks passes successfully the previous stress test rounds?

It has to be noted that not all banks in Ireland were tested, including those that were nationalized. In the second round of stress test earlier this year there were certain conditions that need to be improved. But we have already had progress between the first two rounds. Now will be drawing conclusions for the new set of stress tests.

You have talked about how creditors should assume a greater share of the burden of propping up banks that are in trouble rather than having just the states bail them out. How can such a mechanism be developed?

Most banks in Europe are international so the measures to ensure their stability must be international. We would like to boost the EU monitoring of the banks and to continue to utilize the monitoring mechanisms of the individual member states so that we can spot any risks before they develop into crises.

Whenever we find any risk, we can follow a number of solutions – changing the managers, banning certain practices or products, banning the payment of dividends, or issuing a call to the creditors. This depends on the situation.

We need to create instruments to prevent irresponsibility on part of the banking management or creditors because banks, not taxpayers, need to bail out banks.

Allow me to point out that I have thanked Bulgaria's Prime Minister Borisov and the Bulgarian government for supporting the EC plan for financial regulation and supervision.

Thanks to this support on part of the Bulgarian government – together with the governments of the other member states – as of January 1, 2010, the three independent supervisory bodies that we have set up will begin to function – on banks, insurance, and financial markets.

We are also setting up a council on system risk, and have also taken measures to supervise hedge funds and private equity, and other risky financial operations.

I would really like to underscore that the Bulgarian government supported the Commission on all issues connected with rating agencies, stock markets, banking restructuring funds.

All these topics and actions have also been generated by the EU 2020 Strategy in order to draw the lessons from the crisis and to provide the businesses with the proper tools.

In this way, the Bulgarian supervisory bodies will be working with those on EU level. Provided there are efforts to develop the real economy and to generate growth, this streamlining of supervision will help the Bulgarian market to function better within the common EU market.

You have mentioned that the public procurement procedures and tenders are a problematic field for Bulgaria. What exactly does Bulgaria need to change there?

There are problems, indeed, but I wouldn't say that Bulgaria is the only country in the EU with such problems on public procurement. There are such cases in other countries as well.

I am very strict on adhering to EU regulations on transparency of information and equal access to public procurement tenders as well as exerting all efforts to protect intellectual property.

When this is not done, there will be sanctions. There are respective procedures under way for that but I am not going to comment on them.

What Prime Minister Borisov told me is that with the introduction of new legislation Bulgaria will be in full compliance with the regulations in the EU.

How is the new Single Market Act, which you are finalizing, and which is expected to enter into force in 2012, expected to make the EU more competitive with respect to other global economic powerhouses – the USA, China, India, Brazil?

We live in an open world, and competition is part of our lives. The question is whether this global competition is fair, whether there is reciprocity in that respect. Unfortunately, the answer is "no." Or at least – not always.

Therefore, that is why we need to act in order to attempt to defend the citizens of the European Union. This is not about protectionism but about defending our interests.

For example, now we will be considering and will try to sign an international agreement on public procurement in order to guarantee that the EU will not be allowing countries that do not observe these regulations to participate in public procurement tenders.

But if we put aside these somewhat defensive measures, the most important question is Europe's competitiveness, and how it can be given a boost. Because we must be Europeans, we must espouse the European spirit. We must not be just Bulgarians or just French, and to work on our own with China, for example.

We must protect ourselves. We must not be na?ve with respect to other global powers – the Chinese, the Americans. The crises in Greece and Ireland showed that the future belongs to our joint actions.

That is why we must exert efforts together to strengthen the competitiveness of the European companies and businesses. Please provide your readers with the opportunity to read online everything about this new document – the draft Single Market Act. (The information that Barnier is referring to can be read HERE (http://ec.europa.eu/internal_market/smact/)

This is about a wide-ranging public debate on the 50 proposals that it contains. They can now be criticized, amended, expanded, changed.

This is the unique opportunity for 500 million EU citizens to have the best internal market in the world, and it must be utilized.