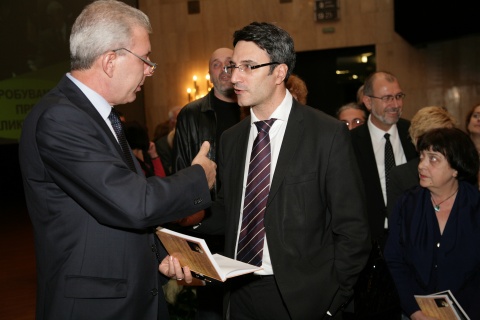 Bulgaria's Economy and Energy Minister, Traicho Traikov (r), was once again among the first to get in line to receive an autograph from author Dimitar Nedkov (l). Photo by standartnews

The premiere of the sequel of the novel by Bulgarian author, Dimitar Nedkov, "The Bulgarian's Sign," gathered once again a distinguished crowd of excited readers at the National Palace of Culture.

"Nedkov's book's message is that there are deeper secrets we must think about and affiliate with. The text make us see there is more to Bulgaria; that it had a different destiny and fate; that Bulgarians are keepers of important secrets, sacred signs, mysterious teachings; that we have a key role in the story of humanity," literary critic, professor Valeri Stefanov, said, opening the book's presentation.

"I read the book in an hour and half. The storyline is intriguing; it keeps your attention; and makes you ask lots of questions. Very often young people become interested in history by such books, not from academic works," Bozhidar Dimitrov, who is also a renowned Bulgarian historian, followed.

"The truth is, for us Bulgarians, our national identity is disappearing more and more. The mystery of Bulgaria is in this sign Nedkov talks about. He knows where the sign is. I do to, but I would not say more. The reader needs to find it himself. Bulgarians must follow their road and find their signs. The book is just a literary confirmation that we have left deep imprints in history and civilization," according to Culture Minister, Vezhdi Rashidov.

"Nedkov opens the door to a world that has its peaks and its dungeons. We seldom go there. I hope this book would provoke Bulgarian researchers and historians to finally begin looking in the abyss known as the Bogomils. At the end, we will see ourselves the way we are – at the bottom of the well. I congratulate Dimitar Nedkov for his courage to be among the first to take the stair down into this well," writer Anton Donchev pointed out.

The author, touched and emotional, took the stage with sincere thanks to everyone for the support and the interest.

"My book has only one author – the Bulgarian people. Before we speak about the sign in the form of the Cyrillic letter "ж", I dare to say the letter is a symbol of proportions, a symbol that must gather together what has been scattered around the world – teachings, religions, political doctrines, interpersonal conflicts. People are divided and the Creator has given us the template that would bring us together," Nedkov said.

The author showed the audience the only copy of the sacred sign made by a Bulgarian jeweler, living in France.

"There is a sign. It did indeed exist. Time split it in three parts. And they must be brought together now. Washington, the Vatican and Moscow, all fight over it. And if this sign is ours, are we going to be able to safe-keep it? Are we going to give it to someone else or are we going to manage its miraculous strength, the mystic embedded in it? So that we would, exactly like the Bogomils, so many centuries ago, remind humanity that there are things we must not break," Nedkov explained.

The author also announced the establishment, under his patronage, of the "The Bulgarian's Sign" Foundation to work on resurrecting the dignity of the Bulgarian nation.

At the end of last year, the author's first fiction book – "The Menace Dan Brown" became one of the 3 top bestsellers in Bulgaria, while in July, 2010, in just days and in times of crisis, 20 000 copies of the second one – part one of the "The Bulgarian's Sign" were sold.