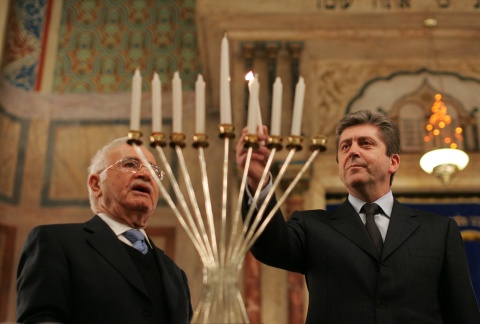 Parvanov was invited to light the first shamash candle of Hanukkah at Sofia's Central Synagogue. Photo by BGNES

Bulgaria's President Georgi Parvanov took part Tuesday night in the celebration of Hanukkah by the Jewish community in Sofia.

Parvanov was invited to light the first shamash candle of Hanukkah at Sofia's Central Synagogue marking the beginning of the eight-day Jewish Festival of Lights.

By tradition, the shamash is lit by a person respected by the Jewish community. This is the fourth time in a row the Bulgarian President Georgi Parvanov has been given this privilege.

After the service in the Synagogue, the special celebration continued with a Hanukkah Night at the Jerusalem Hall of the Jewish Culture Center in Sofia.

Hanukkah also known as the Festival of Lights is an eight-day Jewish holiday commemorating the rededication of the Holy Temple (the Second Temple) in Jerusalem at the time of the Maccabean Revolt of the 2nd century BCE. Hanukkah is observed for eight nights and days.