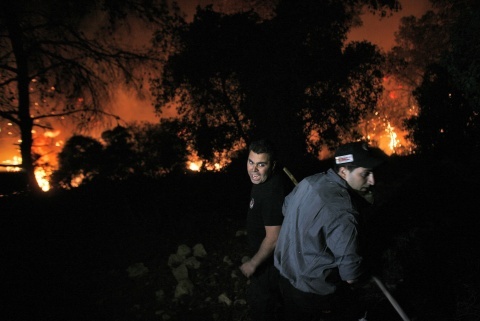 Firefighters battle the flames of a massive forest fire in the Carmel Forest close to Haifa, northern Israel. Photo by EPA/BGNES

The massive fire continues to rip through northern Israel on Saturday, with Israeli and foreign firefighters stuggling to contain it.

A total of 43 people are dead and more than 17 000 are already evacuated from their homes. the alarming figures forced Prime Minister Benjamin Netanyahu sought to call for more international forces to join those already working to battle the biggest inferno in Israel's history.

The fire has destroyed homes in three areas overnight: Ein Hod, Nir Etzion and Yemin Hod, all of which had already been evacuated, according to the Israely police.

The raging fires near the Israeli city of Haifa that started in a dumping ground and went out of control Thursday.The blaze has destroyed the kibbutz of Beit Oren and caused severe damages beyond it. Large amounts of smoke continue to swell in the area.

Meanwhile, at the rescue services' headquarters at Haifa University on Friday, Israeli Fire Department spokesman Guy Menasherov said the Bulgarian firefighter contingent "is working very hard to save lives and save the Carmel. We seem them as brothers in arms and we are working side by side to fight this fire. They are nothing short of heroes"

Initially, Bulgaria was the only country who sent firefighters, while others helped with equipment such as planes. British, Greek, Turkish Russian and Cypriot teams joined the firefighting forces Friday noon.