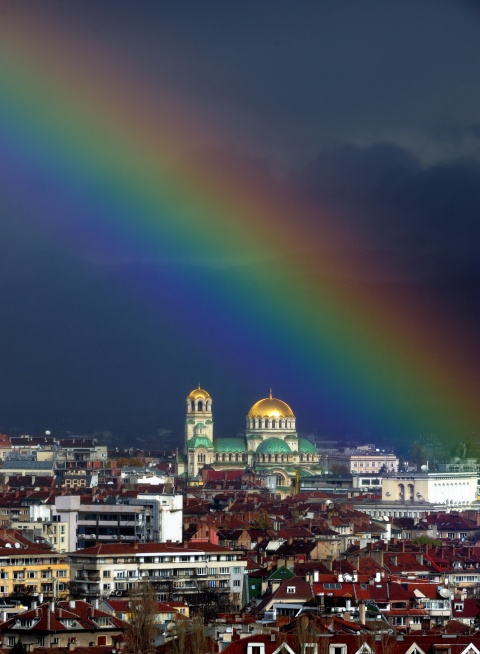 The golden dome of the Alexander Nevski Cathedral is seen backdropped with a rainbow during rain over Sofia, Bulgaria. Photo by EPA/BGNES

Record-high temperatures were registered again in Bulgaria Friday, while the cold weather in Germany took its first victim and thousands were evacuated in Serbia, Croatia and Bosnia amidst flooding rains.

On Friday, Bulgaria registered record-high temperatures in 17 towns and cities, with the hottest weather being in Haskovo – 23,4 degrees Celsius, Ahtopol – 23 degrees, and Sandanski – 22,9 degrees.

The temperatures were above 20 degrees also in Elhovo, Karnobat, Kardzhali, Pazardzhik, Stara Zagora and Sofia.

In the mean time, torrential rains in the Western Balkans caused flooding of rivers and evacuation of thousands of people. Several cities in Serbia have announced a state of emergency, while the Bosnian army units joined the rescue operations. Albanian authorities declared a state of emergency in several northwestern regions of the country, where ragind floodwaters forced the evacuation of hundreds of people.

Lim River that flows through Montenegro and Serbia flooded and destroyed a bridge some 200 km southwest of Belgrade.

The Interior Minister of Montenegro has announced that the country was threatened by a huge danger because of the unprecedented increase of the river levels. More than 1,300 people were forced to leave their homes and move to safer ground.

A state of emergency has also been announced in Croatia. The situation in the city of Metkovic is the most alarming because it has been flooded since Thursday.

In the meantime, Western Europe has been dealing with the snow and cold weather since the beginning of the week. Germany announced Friday that the weather claimed at least three lives – a 62, 73 and 18-year-old.

In Poland, where the temperatures dropped to minus 10 degrees Celsius, the overall number of deaths from the weather blast to 18. In the UK, the situation is not better. London Gatwick Airport, UK's second busiest, was closed for a second day in a row, with another 600 flights canceled as conditions continued to deteriorate. Edinburgh Airport and London's City Airport were also closed until late evening.

The cold took a solid grip over Sweden as well, with the lowest temperatures measured Thursday night were minus 29,6 degrees in Lillhardal in the center of the country.