Sportsman Leaves Behind Interior Minister in Bulgaria's 'Man of Year' 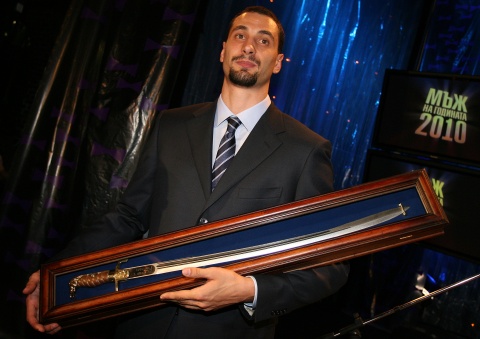 Bulgaria's volleyball star Matey Kaziyski with the award for "Man of the Year" 2010. Photo by BGNES

The contenders have been nominated by 120 journalists from Sofia and around the country.

The "Man of the Year" contest is marking this year its 20th anniversary while Darik radio organizes it for the third time in a row.

A total of 16,636 people have voted online within the last 25 days for their favorite Bulgarian man and 10,492 of them chose Kaziyski.

The volleyball star, who gained his eighth consecutive victory with the Italian team Trentino Thursday night, has arrived in Sofia for several hours, in order to participate in the ceremony Thursday night at the so-called Youth Drama Theater.

Tsvetanov, who received 3,387 votes, ranked second for the second consecutive year, while Plevneliev, who was nominated for the first time, was chosen by 2,757 people.

The Interior Minister, like Kaziyski, was nominated for the second time. He was ranked 2nd in 2009, while Kaziyski was ranked 10th.

The Minister continues to enjoy high ratings over his effort to fight corruption and organized crime, but has lost points in the last months due to scandals related to alleged undeclared properties and the problems with the issuing of the new IDs, which created huge lines all over the country.

Kaziyski was nominated in the contest last year due to the bronze medals he received with the Bulgarian national volleyball team at the European Volleyball Championship in Turkey.

This year, according to Darik radio, he was nominated because of the successful season he had with Trentino, despite the fact that the Bulgarian national team ranked 7th in the world championship in Italy.

The top 10 for 2010 included football star, Dimitar Berbatov (winner of the title in 2009), the director of the all-time Bulgarian box office record breaker "Mission London," Dimitar Mitovski, Father Ivan from the town of Novi Han, near Sofia, for his work to help the homeless, the star of the hit TV series "Glass House," Kalin Vrachanski, the Minister of Agriculture, Miroslav Naydenov, the Minister of Foreign Affairs, Nikolay Mladenov, and Finance Minister, Simeon Djankov (also among the top 10 in 2009).