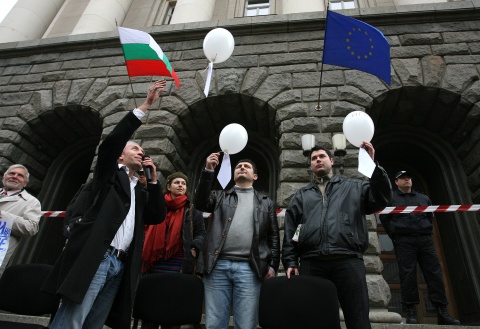 Under shouts "resignation," protesters released in the air three balloons that had the names of three ministers written on them. Photo by BGNES

Bulgarian scientists, university professors, students and people working in the culture sector have gathered to stage yet another protest demanding the implementation of European priorities and policies in education, science, healthcare and culture.

Several hundreds of people participated in the rally which took place Wednesday in front of the Parliament. Protesters placed 12 chairs on a symbolic tribune. They represented the ministers in the government. There were also three balloons with names of three ministers written on them – Vezhdi Rashidov, Culture Minister, Sergey Ignatov, Education Minister, and Simeon Djankov, Finance Minister.

"They say there is a crisis, but our families can feel it stronger than their families," Bulgarian film director Iglika Trifonova said.

People from the movie industry marched with film strips around their necks. They protested against the government's decision to finance Bulgarian movies "when possible."

"Let us create new reasons for national pride," Trifonova said, giving as examples the successful Bulgarian films "Eastern Plays," "Mission London" and "The World Is Big and Salvation Lurks Around The Corner."

Doctors have also joined the protest rally against drastic cuts in the 2011 state budget.

"The fact that so many representatives of different sectors have gathered here says that something unites us. We produce health, not material goods. The government has to realize that a nation that does not value intellectuals and humiliates them, will not advance," Dimitar Lenkov, Secretary General of the Bulgarian Doctors Union, said.

Dimitar Denkov from the Institute for Nuclear Research and Nuclear Energy of the Bulgarian Academy of Sciences (BAS) has stated that in Bulgaria science is done "in the dark and in the cold." In his words, scientists working at BAS receive a salary of EUR 80 due to the lack of financial resources.

The rally ended in front of the former Communist Party headquarters where protesters demanded "resignations." The President of the Movement of Young Scientists "Cogito," Stiliyan Georgiev, released in the air the balloons with the names of the three ministers.

The protesters shouted "goodbye" to the balloons, while an employee from BAS collected in a box coins for a "one-way ticket for Minister Djankov."