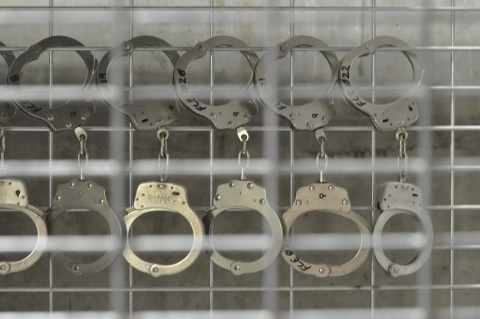 The border police in Bulgaria arrested eight illegal immigrants and four organizers of the traffic channel. Photo by EPA/BGNES

Bulgarian police have arrested one Turkish and three Bulgarian citizens for participating in an international illegal immigrant channel through Bulgaria.

Eight illegal immigrants, mostly citizens of Iraq and Iran, have also been detained during the course of the police operation in the Bulgarian city of Ruse and the town of Elhovo.

The 49-year-old Turkish citizen was is charge of finding people who wanted to immigrate, mostly citizens of Iraq and Iran. He organized their passing through the Turkish-Bulgarian border with the help of other people, while he waited for them on Bulgarian territory.

He was also in charge of accommodating them in apartments in Bulgaria, where they waited to be provided with fake Bulgarian identity documents. Their ultimate goal was to leave for Western European countries.

On Sunday, the border police at General Toshevo stopped to check a van with a 40-year-old driver. The two men and two women who were passengers in the van presented Bulgarian identity documents. An expert check showed that the documents were fake and it was established that the passengers were Iranian and Iraqi citizens.

Besides the driver, the police also detained a 55-year-old man who was another organizer from Northeastern Bulgaria.

On Tuesday, the border police received information that another group of illegal immigrants has crossed the Turkish-Bulgarian border and has been accommodated in an apartment. The police officers found and detained four men, age 16 to 35, who did not have identity documents, and another organizer, a 52-year-old man.

For providing fake documents and transportation from Turkey through Bulgaria to Western European countries, the illegal immigrants gave EUR 3000 per person to the organizers of the traffic channel.