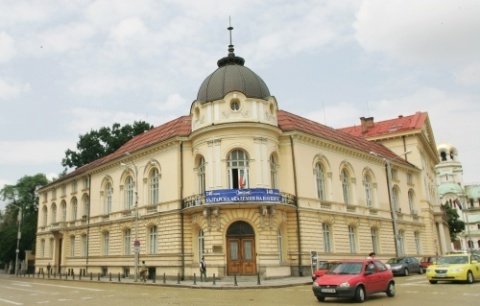 The BAS central building in the heart of downtown Sofia. Photo by Sofia Photo Agency

Authorities have taken up specific measures to make possible demolishing the Bulgarian Academy of Sciences with an urgent legislative amendment currently under review by Parliament.

This development comes after November 15 Bulgarian PM Boyko Borisov and Parliament Speaker Tsetska Tsacheva announced the Academy of Sciences (BAS) will be split into self-standing institutes and its central organs abolished.

Researchers alarmed that would mean an end to the Academy, and went out on a string of protests, after which PM Borisov and Minister of Education Sergei Ignatov announced that they have no plans whatsoever to demolish Bulgaria's oldest science institution.

Nevertheless, last Thursday Rumen Stoilov, a back-bench MP from the ruling GERB party, tabled a legislative amendment to the Law on BAS which mandates precisely the splitting of the academy into self-standing institutes and the founding of a separate, largely ceremonial body of academicians.

The Parliamentary Education and Research Committee has deemed it worthwhile to urgently vote on the legislative proposal and has included it into its Wednesday agenda.

What is most alarming, the amendment forsees that the newly-created institutes would be under the direct jurisdiction of the Ministry of Education and will be subject to merging or closing down by the Council of Ministers at the proposal of the education minister.

This would expressly eliminate BAS as a self-standing entity and will put in the hands of the central goverment the power to eliminate institutes at will - something that BAS researchers have been consistently alarming against.

Thus, although the letter of the legislative amendment is consistent with the statement that BAS will not be shut down, the new law would put all its units at the self-willed mercy of a government that has proven hostile not only to investment in research and education, but also to the Academy as an institution.

Researchers have claimed that in particular the government wants not only to disburden itself from the need to sponsor science and research, but what is more - to lay hands on BAS's many properties.

Bulgarian Minister of Finance Simeon Djankov is a self-confessed BAS-hater. What is more, in interviews he has given to the Bulgarian press before assuming office, he has suggested the idea of selling out BAS's assets, even mentioning specific figures of their worth.

BAS researchers and leadership have alarmed that Djankov has already effected the dismantling of the Georgian Academy of Science during his stint as a World Bank expert in the country.

They have protested the bill for amendment of the Law on BAS and have called a fresh protest Wednesday.