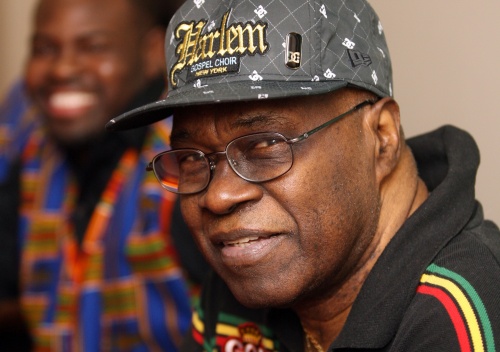 Allen Bailey, founder of Harlem Gospel Choir, has annmounced that the group arrived to Bulgaria a week behore their concert because they wanted to learn about the country's culture and traditions. Photo by BGNES

One of the most popular gospel groups in America, Harlem Gospel Choir, has arrived in Sofia a week before its concert in the National Palace of Culture, the organizers ART BG announced.

The gig in Sofia will take place on December 8 and will include gospel hymns, as well as popular music, mostly songs by Michael Jackson.

"After the first concert in Bulgaria [in November 2009], we realized that your country is very special to us. We came because we wanted to not only introduce the specifics of gospel music to Bulgaria, but also to learn more about your culture and traditions," the choir founder, Allen Bailey, said.

After their performance in Bulgaria, Harlem Gospel Choir will continue their European tour in Belgium, Switzerland, Italy and Portugal and will then leave for China.

"It turned out that people from all over the world could relate to gospel music. We can feel this very strongly in Bulgaria, even among people who do not speak English. We can see in the eyes of Bulgarian people that they have been through a lot and this is why we want to be here longer and learn more about the country," Bailey said.

In November 2009, Harlem Gospel Choir visited Bulgaria as part of their world tour in memory of the King of Pop, Michael Jackson, who died in June 2009.

Then, the choir performed at the Culture and Sports Palace in Varna on November 10, in the opera house in Burgas on November 11, in the National Palace of Culture in Sofia on November 12, and in Hall 3 of the International Fair in Plovdiv on November 13.

The Harlem Gospel Choir was founded in 1986 by Allen Bailey on the occasion of January 15, the birthday of Rev. Dr. Martin Luther King, Jr. The group comprises 65 members, ranging in age from 17 to 70.