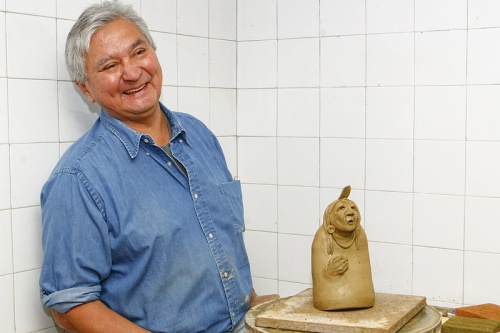 Peter Johns demonstrates his works. Photo by US Embassy in Sofia

Peter Jones is a potter and sculptor who resides on the Cattaraugus Territory of the Seneca Nation of Indians in New York state. He studied under Hopi artist Otellie Loloma while attending the Institute of American Indian Art in New Mexico. While creating his pottery, Jones uses the traditional Iroquois method of pit firing, hand-built coiling and slab construction. Jones' works have won numerous awards, and are on exhibit at museums such as the Institute of American Indian Art in Santa Fe, New Mexico, the Heard Museum in Phoenix, Arizona and in the Museum of Anthropology in Frankfurt, Germany to name a few.

Jones was awarded a grant from the U.S. Department of State to visit Bulgaria as a Cultural Envoy. During his 10 day program from November 10-20, he has visited schools, universities and art centers in the cities of Etera, Gabrovo, Plovdiv, Sofia Troyan and Veliko Turnovo. He spoke to more than 500 students at the American College in Sofia, conducted a demonstration for ceramics students at the Art High School "Professor Nikolay Rainov" in Sofia, and gave a lection at Sofia University.

Jones participated in a public lecture and exhibition at the American Corner in the City Library of Sofia on November 17th along with members of the Eagle's Circle Society. The Eagle's Circle are Bulgarians who study and practice Native American arts including music, dress and dance.

During his demonstrations he designed and donated sculptures to the hosting institutions. His works are known for incorporating what he calls "Indian humor". (Biography source: US Embassy in Sofia website)

Where do you come from, and what kind of art work do you do?

My name is Peter Johns, I am a member of the Onodaga Tribe of the Iroquois Confederacy, I live in Western New York State. I have been practicing pottery and sculpture for 45 years.

How do you describe the underlying topics and ideas of your art?

A lot of my sculpture is about what things are affecting our tribe, our people, the changes we've gone through, some of the culture. It is just art based on our heritage.

How have your works been received by the Bulgarian audience?

Very well. I was surprised. I presented my work to different groups of people in Bulgaria – including university and high school students – everyone liked them. There has been a lot of interest.

In addition to presenting your work, you have also done some lecturing in Bulgaria. How exactly did you come to Bulgaria to do that?

The American Embassy brought me here as a cultural envoy. I have been going around lecturing on Indian, Native American life and American Indian art.

I have been combining the two topics – about where we came from, and how my art has arrived at this point, comparing it lately with a lot of Bulgarian lifestyles and some of the art.

What results has that comparison yielded?

A lot of the people in the Bulgarian villages remind of the way that we Native Americans lived not too long ago. Some of the pottery of the Ancient Thracians is very similar to ours. Not particularly to the Iroquois pottery but the Southeastern pottery in the United States. I was really surprised when I saw the similarity.

And some of the pottery you have in Bulgaria is some of the oldest pottery in the world. A lot of people haven't heard about it but they will now.

What kinds of institutions did you lecture at in Bulgaria?

I was at Sofia University, the National Academy of Art, I was in Troyan, Gabrovo, Etara, Veliko Tarnovo. I did not make it to the sea, though.

I met the Eagle Circle Society based in Sofia. And we talked, and they did a performance of song and dance for us. I know about the other groups in other countries. The one in Germany is perhaps the largest that I know about. It is very interesting to see this group of dedicated people who are not really trying to be Indians but are just interested in our culture and our language.

More generally speaking, what is it like the life of American Indians in today's USA?

It varies greatly by state. We have over five hundred different tribes in the USA, and they are very diverse. Our life has changed a lot on my reservation in the last 20 years. Some tribes are not so fortunate. They are still very poor. The larger tribes like the Sioux and the Navajo have some problems that are really hard to manage because of the size of the country. But things are changing fast.

Modernization. People are getting cell phones, satellite dishes. Everything everybody else has we are trying to get. I am not so sure it is a good thing but I have own my own cell phone and satellite dish. But this is a big change for Native Americans.

People in Bulgaria have heard pretty bad things about the life on Indian reservations. How would you describe the situation?

Some places are bad, some places are not so bad. But 20 years ago we did not have running water. Now we are having water lines put in, sewer lines, all of the modern infrastructure that most cities have.

That has changed a lot in the last 20-25 years. But there are still problems – maybe political, government problems. Sovereignty, nation to nation problems, working with the federal or state governments, there is always something.

How does Thanksgiving feel from a Native American perspective?

It is a good day to eat. And a day off work. It is not really observed the same way. We have a different Thanksgiving, a traditional holiday that is different.

What did you think of Bulgaria and the Bulgarians? I understand it has been your first visit here?

It is my first visit to Europe, actually. As I said, I found the people here in some ways similar to ours. Very nice, very compatible to me. I like it, especially in the countryside. A big thank you to all of you.