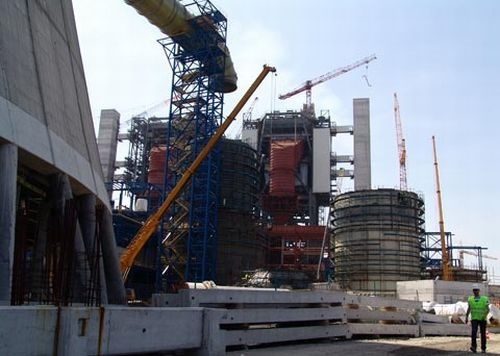 AES has made massive investments in the AES Galabovo TPP at the Maritsa East 1 complex over the past few years. Photo by chambersz.com

In an interview for the Bulgaria-US Survey of Novinite.com (Sofia News Agency) Lithgow implied that AES could still select another country for its USD 400 M photovoltaic park investment if the long-anticipated Bulgarian legislation on renewable energy does not provide the conditions the American energy company is looking for.

If constructed, the photovoltaic facility of AES Solar Power, an AES subsidiary, at Kalipetrovo near Silistra will have a capacity of 80 MW, and will be largest solar park in Europe. The plans for the AES solar park were announced earlier in 2010 and raised questions about state regulation of renewable energy in Bulgaria, with US Ambassador James Warlick warning at one point in July 2010 that AES as a company might decide to approach some of Bulgaria's neighbors such as Romania with the same investment offer.

"We will have to look at the new Bulgarian legislation on renewable energy and see," AES Country Manager Peter Lithgow told Novinite.com when asked if there is a chance that Bulgaria might lose this potentially large investment to a neighboring country, for example, Romania.

At the same time, however, he has recognized the desire of the Bulgarian government to create regulation that encourages sustainability on part of investors in renewable energy.

"We understand that the Bulgarian government is moving to make practical changes in the renewable energy legislation. We have, of course, as other foreign investors, communicated our position to the government in that respect. We are of the view that the legislation on renewables needs to streamline the application process for inclusion of new renewable energy projects into the energy network. Overall, the government would like to move to evaluating the projects based on sustainability. What it needs to do with respect to renewable energy is to create a regulatory frame that meets the requirements of both large investors and banks to which the investors go in order to finance their projects. The government's objectives are - and AES generally supports that - aimed at creating a good screening process to sift through the larger investors. The legislation is in its final stages and from I understand it will be announced in early 2011," Lithgow explained.

Lithgow's statement appears to be similar to what US Ambassador James Warlick told Novinite.com (Sofia News Agency) on the same subject.

Bulgaria's renewable energy legislation needs to be harmonized with EU laws in order to attract major foreign investors such as AES, Warlick said in an interview.

With respect to AES's plans in the field of thermal power in Bulgaria, he has denied interest on part of the company in acquiring the Maritsa East 3 TPP, which is currently on sale by Italian company Enel.

AES, which is one of the largest single foreign corporate investors in the Bulgarian economy in the past 20 years with a total investment to date of EUR 1.3 B, has invested massively and expanded the AES Galabovo TPP, part of the Maritsa East 1 TPP complex, with a capacity of 670 MW.

He did point out, however, that AES is looking increasingly at renewable energy options saying that the company's principle project in renewables in the country to date, the 156 MW wind park Sveti Nikola "was a great example where you can see how we can do projects here in Bulgaria."

"AES Bulgaria is a concept for AES investments in Bulgaria and it isn't specifically targeting one particular technology. It was always the case that we would look at the developments in the energy sector, and when legislation emerged that was conducive to large-scale investments in the sector, we would look at those opportunities very carefully, and we would take those... We took the view that given our strategic intentions to develop our business portfolio in Southeastern Europe Bulgaria could be an anchor for that," the AES Bulgaria Manager said pointing out explicitly the importance of the investments of the American company for the Bulgarian economy.

The combined AES capacities represent close to 10% of the Bulgarian energy sector.

"I think the important thing to be understood here is that AES's investment in Bulgaria is a success story for the nation. The investments of AES - and many other investors for that matter - stand for a transformation, a change in attitudes, in management, in approach, measured against the benchmarks of an international corporation," Lithgow concluded.