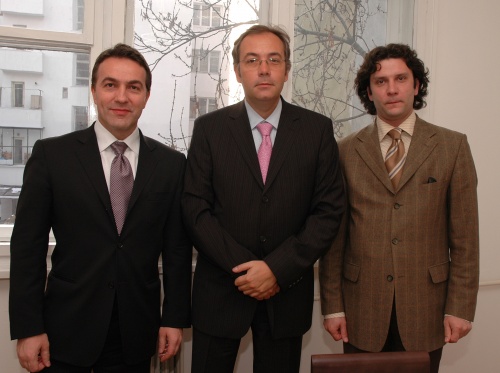 The American Foundation for Bulgaria (AFB) is a non-profit, non-governmental organization for community assistance, registered in the state of Massachusetts, US.

The foundation functions on the territory of Bulgaria since 2004.

The Foundation was established with the mission to support, encourage and promote excellence in education, natural sciences, arts, culture, and the humanities.

The founders of the Foundation are two Bulgarians living and working in the USA - PhD. Diko Mihov- President, and PhD. Teodor Vasilev- Executive Director. Aleksey Hristov is the Program Director and Project Manager of the Bulgarian branch.

"It is our belief that in a free and democratic society, individuals can aspire to and achieve their goals in all of these areas. With this innate understanding, we strive to support young people in their pursuit of excellence, and to provide the means with which they can develop their talent and expertise in their chosen fields. The Foundation is committed to the strong international spirit of cooperation that exists between Bulgaria and the United States; and, we endeavor to support that relationship through scientific, cultural, business and artistic exchanges between the two countries," the Foundation's mission statement reads.

Teodor Vasilev is a Sofia native. He has graduated from the German Language High School in Sofia and from the University for National and World Economy, also in Sofia, with a Bachelor's Degree in International Relations. In 1990, he continued his education in the US. Vasilev holds a Master's Degree in Political Science from Boston College, a PhD from Harvard, and has also attended lectures at Columbia College, New York. He is one of the founders of the Balkan Studies Institute. Vasilev continues his professional development as a consultant with auction houses and as a developing director of the "Elizabeth" Arts Foundation, based in New York. He is the President of DTR Modern Galleries.

Diko Mihov has graduated from the Mathematics High School in Dobrich. He has been a member of the National Mathematics Olympic Team, winning gold and silver medals in 1983-1984. Mihov has been enrolled for one year at the Sofia University where he studied mathematics, and then continued his education in the US. In 1990, Mihov received a Bachelor's Degree from Park University, Missouri, and in 1996 - a PhD from the Massachusetts Institute of Technology (MIT). At the beginning of the 90s, he lived and worked in Boston where he met Vasilev and Hristov. Since 1997, he works as a managing director of Hedge Fund D. Show, New York. In 2004, Mihov became the AFB President. In 2008 he withdrew from the management of the Foundation, but remains its main sponsor.

An outside interview with Diko Mihov read HERE.

Alexey Hristov graduated from the English language high school in his native city of Vratsa. In 1990, he enrolled at the Ecclesiastic Academy St. Kliment Ohridski and in 1997 received a Master's Degree in Theology from Sofia University. Hristov has worked for Darik radio, the "Democratic Review" magazine, and the "Citizen" Association. In 2001, he won a stipend from the Georgetown University where he spent one year as an academic scholar and researcher. At Georgetown he studied the non-profit sector in the US, the civic society and public administration. The opening of the "Gipson Archive" exhibit. Photo by AFB

Since 2004, the American Foundation for Bulgaria funds several programs; the initial three are still the basis of all activities carried out currently.

In 2004, AFB began financing the preparation for and participation in international competitions of the Bulgarian Olympic teams in mathematics, informatics, physics, biology, chemistry, linguistics, astronomy, and physics.

In 2005 the program expanded, and, apart from the mathematics and informatics teams, AFB began supporting all other science teams – informatics, chemistry, biology, astronomy, and the "Young Physicists" team. The same year these teams won 7 gold, 12 silver, and 12 bronze medals.

This program is the largest, the most successful and the most prestigious of the AFB programs with the most medals, recognitions and awards.

The second major and initial AFB program is the Support of Bulgarian High School Education. It was initiated in 2004.

The scholarship recipients are outstanding students in the fields of mathematics, informatics, physics, biology, chemistry, and foreign languages from the secondary schools in humanities as well as arts and culture. In 2004, there were 50 stipends for mathematics, while in 2005, the program expended significantly to include all other subject and to reach 150 recipients.

In 2004, AFB initiated a program which finances student film projects. The program was created to support student filmmakers. Since then it has grown significantly. In 2005, ABF launched the "Early Bird" student film festival as its extension, and just recently concluded the sixth edition. The initial goal was to promote the program, but with time the festival became a project on its own. The second edition was already international.

AFB is further committed to the development of talented, young authors in the field of literature. The Foundation sponsors scholarships and provides production grants to enable first-time authors to write and publish their works. The program grants funding for works of fiction, non-fiction and poetry.

ABF promotes young and gifted visual artists and provides financial support for their exhibits in the US and around the globe. The grant recipients are selected by an expert jury.

The pilot project for financing extracurricular education in science and mathematics in Bulgarian high schools across the country was launched in 2005. The celebration of young Bulgarian talent. Photo by ABF

The contest sets the goals to motivate students to master their artistic skills; to level the standards for the student preparation in drawing, and to raise the level of education in visual arts.

The competition was initiated in 2005 by the National School of Visual Arts "Ilia Petrov" and the National Academy of Arts. The school is also the organizer and the host of the contest.

In 2006, AFB became involved as the main sponsor of the National Contest.

The Film Academy for Audiences Project - "Understand the Art of Cinema"

The project was initiated in the beginning of 2006. On the last Tuesday of each month, Bulgarian cinema professionals gave a short lecture, followed by a free film showing. The Academy lecturers are movie critics, actors, directors, instructors.

In 2008 "Film Academy for Audiences" directed its attention to the young audience – high school and college students. AFB offers them free passes for different movie showings.

The project aims at including over 360 middle and high school students in extracurricular math classes. It offers opportunities for gaining higher-level knowledge in the subject and prepares students in grades 5 to 12 to successfully participate in competitions and Olympiads. The classes are taught by instructors with years of experience in the area of mathematics.

The "Crafts" project, part of the Mobile Academy "Start in Life," has been financed by AFB since 2006.

The project aims at training children 12 or older from the Doganovo orphanage in learning the trade of sewing, weaving, knitting and other related skills.

In 2007, the training period was extended from three to six months. Instructors are qualified specialists in the field of design, fashion, weaving and textile. They are all highly motivated to work with disadvantaged children.

Kids from the home are also involved in the making of traditional Bulgarian costumes combined with modern elements, to be modeled and sold at fashion shows. Beside traditional costumes the children create martenitsi, necklaces, belts, bags and other accessories and ornaments made of natural materials.

The 1st Student Short Film Festival "Early Bird" took place on May 25, 2005, in the "Sofia cinema "Center." Students from the South-West University "Neofit Rilski," The National Academy for Theater and Film Art (NATFA), and the New Bulgarian University participated in the first edition of the film fest.

In 2006, the festival expanded with international participation.

The 6th edition of the International Student Film Festival "Early Bird," just concluded in Sofia. It was held between November 17th and 21st. More about the "Early Bird" student film festival read HERE. The mathematics Olympic team meets with the Speaker of the Parliament. Photo by AFB

The 18th Balkan Informatics Olympiad took place from October 31 to November 6, 2001 in Montenegro. The Bulgarian national team won three out of four gold medals and one silver, making it an absolute leader in final team standings.

On October 4, 2010 Bulgarian President, Georgi Parvanov, bestowed the 8th annual award in the name of John Atanasov  - a prominent scientist with Bulgarian origin and the creator of the first computer in the world. The prize is given for achievements in the development of the information society.

Anton Anastasov was the recipient of the "John Atanasov Special Award for Students." He is a graduate of the Mathematics and Science High School in Haskovo and received a recognition for his success in more than 34 Olympiads and others competitions – winner of several gold, silver and bronze medals. In 2010, he won a silver medal at the International Informatics Olympiad in Canada. Anton is a three-time scholarship recipient of AFB.