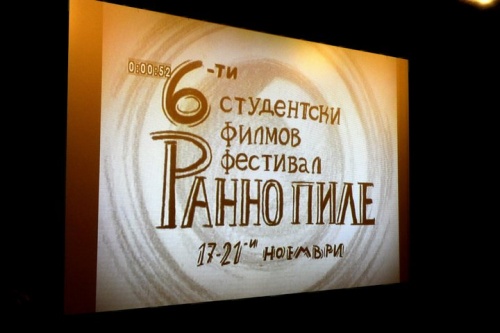 The poster for 6th edition of the International Student Film Festival "Early Bird." Photo by AFB

The 6th edition of the International Student Film Festival "Early Bird," organized by the American Foundation for Bulgaria and the National Academy for Theater and Film Art (NATFA) was held in Sofia between November 17th and 21st.

"Early Bird" is a festival for students enrolled in film academies, who wish to present their work before colleagues and the European audience, to share their knowledge and doubts, and challenge the world. The festival – the only Bulgarian student film forum gives the audience the opportunity to take a closer look at the art, viewpoints and the aesthetics of young filmmakers and to the participants and their teachers. It is a unique place to exchange ideas and experiences. "Early Bird" is a festival for students enrolled in film academies, who wish to present their work before colleagues and the European audience. Photo by AFB

The festival is open for international participants under the conditions they have not yet graduated from college and the films (movies, documentaries, and animation) are 90 minutes or shorter, have English subtitles, and are on Beta SP (DVD).

The organizers are paying travel and accommodation for all foreign participants for the entire duration of the festival.

The international jury has 3 members with one of them being the student, winner of the Grand Award during the previous edition of the festival. They are required to keep their decisions secret until the very end of the festival. The awards are bestowed during a special ceremony after the last film showing.

Visiting professors and other guests from Bulgaria and abroad teach master classes within the frame of the festival, along with debates about important issues of filmmaking.

The 1st Student Short Film Festival "Early Bird" took place on May 25, 2005, in the "Sofia Cinema "Center." Students from the South-West University "Neofit Rilski," The National Academy for Theater and Film Art (NATFA), and the New Bulgarian University participated in the first edition of the film fest.

The 2nd Students' Film Festival "EARLY BIRD" already had international participation. In 2006, Florian Gallenberger, a young German director, student of Wim Wanders, was an honorary guest. He showed to the student audience his films and taught a master class.

In 2007, the third edition of the fest included student films from Romania, Turkey, Greece, Serbia and Croatia. Ronald Harwood, the 2003 Oscar winner of the Academy Award for Best Adapted Screenplay for the movie The Pianist, was a guest of the festival.

The showing of films produced by college students in the US was launched in 2009.

During the opening night of the 6th edition of the festival, the award-winning short films from the previous editions were shown to the audience, who gathered inside the NATFA building, anticipating the event. Ken Moskowitz (l), Counselor for Public Affairs with the US Embassy in Sofia during the festival's opening night. Photo by AFB

The 6th edition included 51 student short films from Bulgaria, Romania, Serbia, Croatia, Albania and Turkey along with 14 films from the special program, titled "American Focus" with films from the US – Boston University, Visual Arts College in New York and the California Art Institute.

The 2010 festival brought together students and professors from NATFA, New Bulgarian University, the Southwestern University and the Art College for Film along with foreign guests from all participating schools abroad.

The jury members included Professor Maria Dora Mourao from Brazil, Professor Zviad Dolidze from Georgia. The top prize winner from 2009 – Gorge Kiper from Romania was the President of the jury. The US Embassy Press Attach?, Vincent Campos (front) and the AFB Program Director, Alexey Hristov, at the award ceremony. Photo by ABF

United Bulgarian Bank was the sponsor while partners included the Bulgarian National Television, Fiesta TV, NATFA, the Art Hostel, and the "Lik" magazine.

Best Film – Grand Award "Benjamin" – director Matia Vukshich, ADA Croatia, an original statuette and USD 1 000 for the financing of the next project.

Best Foreign Film Award "The Birthday" – director Luiza Parvu, UNATC, Romania, an original statuette and USD 500 for the financing of the next project.

Best Bulgarian Film Award "Me, you and nobody else" Milena Kaleva, NATFA, Bulgaria, an original statuette and USD 500 for the financing of the next project.

Best Director Award "Afterparty" – Ivana Mladenovich, UNATC, Romania, an original statuette and USD 300 for the financing of the next project.

Best Script Award "The Service" – Boris Nikolov, NATFA, Bulgaria, an original statuette and USD 300 for the financing of the next project.

Best Camera/Director of Photography Award "Outrageously Disco" – Nicolae Constantin Tanase, UNATC, Romania, an original statuette and USD 300 for the financing of the next project.

Best Editing Award "Nameless" – director Boginya Naidenova, NATFA, Bulgaria, an original statuette and USD 300 for the financing of the next project.

President of the Jury Award "Wastepicker" – Neriman Eldem, IKU, Turkey, an original statuette and USD 300 for the financing of the next project.