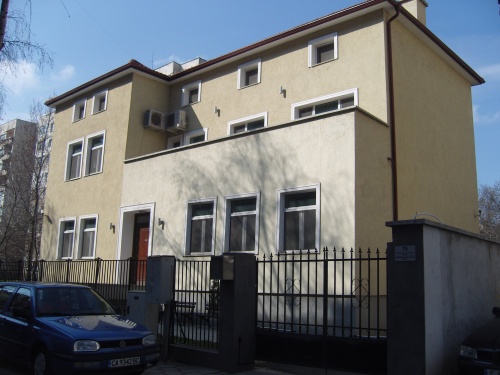 The American Research Center in Sofia (ARCS) was established in 2004 with the goal of engaging in and promoting excellent scholarship on all periods of Bulgarian and Balkan history across the full range of humanistic and social scientific disciplines.

ARCS aspires to be a primary point of contact and exchange between scholars from North America and the Balkans. The Center actively fosters this growing intellectual community and new opportunities for collaboration and cooperation. ARCS is a member of the prestigious Council of American Overseas Research Centers (CAORC).

With a generous grant from the Packard Humanities Institute, in 2008 the Center was able to acquire permanent quarters on a four level building near central Sofia at 75 Vasil Petleshkov St. in Hadzhi Dimitar.

In addition to a hostel for students and visiting scholars, the facility houses the Center's rapidly expanding library, now nearing 10,000 volumes. The core strength of the collection is in Ancient History and Archaeology. The library is open to the public Monday through Friday, from 9am to 5:30pm. The catalogue can be accessed online through the ARCS website: www.einaudi.cornell.edu/arcs. The ARCS library is open to the public Monday-Friday, 9:00am to 5:30pm. The collection now nearing 10,000 volumes, has strengths in Archaeology and Ancient History. The library is also the primary venue for the ARCS seminar program. These events are open to the general public. In this photo, Profession Margarit Damyanov, NIAM-BAS, discusses the Greek colonies of the Western Black Sea coast.

ARCS, with support from the America for Bulgaria Foundation, granted in 2010 nearly USD 200,000 for the preservation and enhancement of Bulgaria's rich archaeological heritage, and also to collaborative archaeological field projects conducted jointly by teams of Bulgarian and American scholars.

Every year, ARCS awards fellowships to advanced undergraduate and graduate students from North American universities to travel to Bulgaria and to participate in the Center's academic program. The ARCS Academic Program leads its students throughout Bulgaria and neighboring countries on study trips. In this photo, Tara Yin, an ARCS fellow for 2010-2011, ponders the frescoes in the Church of St. George, Kyustendil, with Galina Dyankova, an archaeologist in the Kyustendil Museum.

ARCS fellows focus on acquiring basic competency in Bulgarian or another Balkan language; on developing an understanding of the histories and cultures of southeastern Europe, with special emphasis on Bulgaria, from prehistory to the present day through both extended study trips in the Balkans and lectures offered by Bulgarian scholars; and on furthering their own scholarly research. ARCS is equally committed to contributing to the development of the next generation of Bulgarian scholars. The Center provided in 2010 short-term fellowships to fifteen advanced doctoral students from Bulgarian universities for travel to the American Research Institute in Turkey and the American School of Classical Studies in Athens. This successful program will continue in the coming years.

The Center has launched a publications program, the first volume of which appeared in 2010--Nassya Kralevska-Owens' Communism versus Democracy, Bulgaria 1944-1997, a revised and updated English translation of her prize-winning 2001 book, Untitled, Destroyers and Builders of Bulgaria. In the future, ARCS hopes to continue to make available English translations of fundamental works of Bulgarian scholarship.

ARCS recently won a prestigious Challenge Grant from the National Endowment for the Humanities in the amount of USD 750,000. To receive the full grant, ARCS must now raise USD 2,250,00 in the next three years. If successful, ARCS will emerge from this process with an endowment which will help to ensure the institution's long-term stability. Interested donors may find more information on the ARCS website.

In its short history, ARCS has set a course that promises to lead it to the upper echelon of research institutions in southeastern Europe.