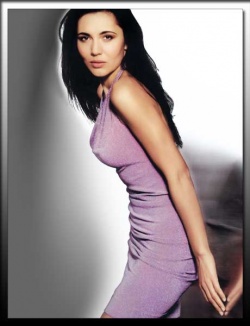 The Bulgarian actress, Michelle Bonev, who has been living in Italy for years, stirs another scandal. Photo by michellebonev.com

Bulgarian actress and film director Michelle Bonev has been involved in a scandal in Italy, the Bulgarian private TV channel bTV reported.

Italy’s Minister of Culture, Sandro Bondi, was asked by the opposition to resign because of an allegedly “fabricated” award, given to a autobiographical movie by Bonev. The motive was that the Italian PM Silvio Berlusconi has exerted pressure on him to give an award to his Bulgarian friend.

According to the Italian media, Berlusconi has promised to arrange Bonev’s participation in the 2010 Venice Film Festival in September. However, the Bulgarian also demanded that she was given an award, the media reports.

Michelle Bonev has been living in Italy for many years. There, she is known as a scandalous figure. According to unconfirmed information, she had close relations to the director of the Italian national television.

A Bulgarian delegation, led by Culture Minister Vezhdi Rashidov, participated in the ceremony, in which Bonev was given the award, which is thought to be fabricated especially for her.

The Italian media also published information that the trip of the Bulgarian 40-member delegation was sponsored by Italy. However, the Italian Culture Ministry officially refuted the accusations.

The Bulgarian Culutre Minister, Vezhdi Rashidov, however, told Italian journalists that the costs for the trip have been “at the expense of the host country,” i.e. Italy.

“When I get invited, I do not ask my host whether he has a receipt for what he has offered to me. I was not in the jury and I did not give any awards. I am not interested in people’s private lives,” Rashidov said.