Shale Gas in Bulgaria - Is a US-Led Breakthrough Imminent? 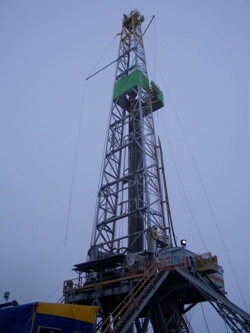 In recent years, a novel US-implemented approach to natural gas extraction has been changing the sector, and in 2010, American companies have started introducing it to Bulgaria.

"Shale gas", as it is called, is no different in composition from conventionally extracted gas, but lies deposited at a geologically different place. Whereas the regular approach includes tapping into underground cavities that have trapped hydrocarbon gases, producing shale gas involves extracting gas that has been, for all purposes, "dissolved" in an underground layer of "shale" rock.

That this approach has not been yet applied in Bulgaria is no surprise, as it is hardly introduced in the European continent at all. Exploration is underway in countries like Romania and Poland, with the latter having the prospects of becoming the pioneer. Russian giant Gazprom has expressed strong interest in developing the technique.

In the USA, on the other hand, where it was first introduced, and is now quite popular, shale gas had led to an important transformation of the natural gas market. Since the mid-00s, American shale gas production has been on dramatic rise, leading the USA in 2009 to become the largest producer of natural gas globally, surpassing traditional leader Russia.

This evolution of the American gas marked is something that makes shale gas an even more intriguing and enticing opportunity for a country like Bulgaria. First, up to now Bulgaria has regarded itself as a territory with virtually own no traditional energy sources. Introducing a new approach to extraction might tap resources that were up to now inaccessible. Second and relatedly, Bulgaria depends for more than 90% of its gas consumption on one single foreign source, namely Russia – a situation that has of late being increasingly discussed as unfavorable not only in Bulgaria, but also across the EU, especially in light of the 2009 gas crisis. Discovering sizeable own deposits might radically change that picture, with all  benefits this involves, both economic and strategic.

The novelty of the approach also leaves some questions yet unanswered. In the US, there are already concerns about the environmental safety of the procedure, which involves the high-pressure introduction of chemicals needed to extract gas from shale. This, it is said, might lead to leakage and pollution of groundwater. While  producers' systematically state that the process is no more dangerous than other, more familiar practices, Bulgarian eco-organizations have admitted to Novinite.com that they do not have sufficient information to judge on the safety of the procedure.

Shale gas has boomed big on the Bulgarian scene with the introduction of the interest of US-giant Chevron in prospecting in the northern parts of the country. To learn about this interest one did not have to inquire much, as it was presented at a highly-publicized event by none other than the American ambassador in Sofia James Warlick. Since then, Warlick has several times reminded the Bulgarian public of Chevron's desire to develop the country's resources. This somewhat surprising persistence has provoked remarks on the part of Minister of Energy Traicho Traikov, who reminded the US diplomat that as per Bulgarian legislation the government cannot simply give an exploring permit to any one company without first formally holding a competitive tender. Notwithstanding, Warlick's emphasis on shale gas and Chevron has always been in the context of the heavy dependence of Bulgaria on one source only – Russia – and should be accordingly understood.

Since a major such as Chevron is manifestly interested, then the obvious conclusion is that there are at least strong suspicions of the prospects of sizeable deposits. Indeed, here the US ambassador again gave the impression he has his own specific information, and repeatedly stated that the north-east of Bulgaria lies over some 20-25 B cubic meters of shale gas, which is little less than Bulgaria's demand for ten years.

Chevron, which has been somewhat elusive regarding its intentions in Bulgaria, citing for Novinite.com a "long-standing policy not to discuss specifics of new business activities," has not confirmed the figure.

Diplomatic speculations aside, the fact is that in September Direct Petroleum, a US-based small oil and gas company with a Bulgarian subdivision, announced the first two discoveries of shale gas in Bulgaria. Both are located in the central northern part of the country. The first, at Deventci (located between Pleven and Vratsa), is of modest but reasonable size – 6 B cub.m. The second, near Etropole, is of a considerable scale, at a forecast size of some stunning 300 B cub.m.

Nevertheless, as Kolyo Tonev, manager of Direct Petroleum for Bulgaria has commented for Novinite.com, this amount is only an initial forecast, and it is yet to be determined what part of the total amount will be technically accessible for economically-viable extraction. In a lot of cases, shale layers rich in gas are found under geological terrain that is hard to breach and renders extraction useless. At any rate, should the 300 B m3 hold, some significant extraction potential must be in store. According to Tonev, extraction from the smaller Deventci site might start as early as end of 2011, while the Etropole site might have to wait four or five years for its development, given the technical nature of the work. (For the full interview with Direct Petroleum's manager for Bulgaria, read HERE.)

In October, authorities gave another permit to Park Place Energy Corp., a US-registered, Canadian-based company, to explore for gas in the Vranino block near Kavarna in north-east Bulgaria. It is good to note that Bulgarian legislation does not distinguish between bids for shale gas and conventional gas production. Nevertheless Park Place has a strong history of shale gas and this is what it is going to be looking for.

According to Diana Yaneva, director of the Underground Resources and Concessions Directorate at the Bulgarian Ministry of Economy, Energy and Tourism (the entity in charge of bids for exploration and drilling permits), speaking for Novinite, 6 more bids for gas exploration are developed to be launched. Two of them – for the Novi Pazar and Silistra blocks – have already been given approval by government (as is required by Bulgarian legislation), and just have to be published in the Official Journal of the EU in order to be formally started. We may expect that Chevron will bid for one or both.

In any case, readers must not expect a revolution tomorrow. Bulgarian legislation has it that bids take some months to be finalized, then typically follow a couple of years of exploring, and then – if significant deposits are found – one must implement ways to extract.

Chevron said it did not expect to get any shale gas in Bulgaria before four or five years, given all stages of exploration and building adequate infrastructure for drilling and transportation. Direct Petroleum, which is at the most advanced stage, hopes to start production at Deventci by the end of 2011.

Not much is known about the environmental safety of the procedure. Unprejudiced moderate suspicion can be commended as a cautionary practice toward any new method of extraction. In the case of shale gas, there are a few things that bring concern beyond this general observation.

They all relate to the procedure of injecting high-pressure liquids in a process known as "hydraulic fracturing" or "fracking" in technical lingo. There are concerns that the high pressure used can cause both liquids and natural gas to burst from the special encasements and reach onto the groundwater rendering it dangerous for drinking and agriculture. To boot, the chemicals used in fracking are considered "corporate secret" and thus their nature is not known to either public or authorities – in the USA and elsewhere.

The issue of leakage is not just fanciful eco-speculation. In June, the American NPR produced an alarming report about the poisoning of a number of drinking water sources in a small Pennsylvania community precisely from hydraulic fracturing gone wrong.

It is yet to be determined whether the accidents are just that – accidental – or they are in some way intrinsically related to the procedure. Both Direct Petroleum's Tonev and director Yaneva at the energy ministry have assured Novinite.com that since fracking is done at depths exceeding 3,000-4,000 meters, the possibility of drinking groundwater to be polluted is close to nill.

On the more controversial, yet still high-profile side, novice film director Josh Fox released in 2010 the documentary movie GasLand to garner immense response from the public and critics alike, as well as a strong outcry from the industry. Energy in Depth, an umbrella organization of companies from the sector, has even published a "Debunking GasLand" page, in which they provide countering arguments on what they see as a number of misleading and inaccurate statements and insinuations in the movie. Anyhow, the film not only managed to secure a number of awards, including the 2010 Sundance Special Jury Price, but also stirred some real debate in the American public.

Among the hottest topics of debate in the States is the degree to which fracking is and needs to be regulated – on the state and federal level. As of now, for example, the procedure is not subjected to the federal Safe Drinking Water Act. At present, both chamber the US Congress are mulling a so-called "Fracturing Responsibility and Awareness of Chemicals Act." The federal Environmental Protection Agency has started a comprehensive survey, which it intends to finish in 2012, about the overall safety of the technique.

In Bulgaria, local environmental organizations, united under the "For the Nature" coalition, have told us that they do not have adequate information yet. Director Yaneva at the Bulgarian energy ministry told Novinite that the approach does not have specific regulations in Bulgaria, and given the state of legislation "there is no way it can be specifically regulated", which suggests that for the time being the need to do so is not yet apparent. Yaneva added that given the great depth of drilling "no special measures for the protection of agriculture are yet in order."

Should shale gas proceed in Bulgaria – as it is bound to do – a debate like the one in the States must be started over here too.

For now, shale gas in Bulgaria – and Europe at large – might be termed the exciting unknown. Should estimates of Bulgarian deposits prove correct and should their extraction prove to be technically and economically feasible, the country not only revolutionize its gas marked, but also acquire a strong strategic asset vis-?-vis Russia, with respect to which Bulgaria has frequently felt powerless.

Of course, economic and strategic development cannot come at the expense for the environment and the health of humans, so people and authorities need to brace for some sober and difficult considerations.