My Thanksgiving Note to the American University in Bulgaria 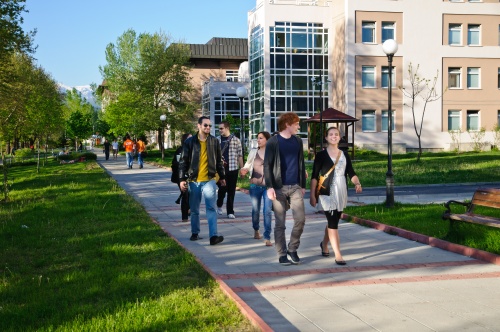 Thank you for being my home for four years – some of the best in my life!

Thank you for sheltering me in your residential campus, Skaptopara. Having in mind the scary stories I have heard about dormitories, I could not ask for a better (and cockroach-free) room. But my most favorite place to be is definitely the yard with its fountain and swing – perfect for studying on a blanket on the grass, playing volleyball or just hanging out with friends and daydreaming about the bright future that’s ahead of us.

Thank you for the wonderful friends, which are now scattered on all continents, busy making the world a better place! Because after all, you taught them how to be future leaders, how to take care of people in need and how to contribute to the fight against global warming.

Thank you for the inspiring teachers, Bulgarian and international, who taught me how to write feature stories, solve linear equations and learn about the first colonies in North America. But I am more grateful to them for teaching me how to be tolerant, committed and responsible, a team player.

Thank you for the network of smart and talented fellow AUBG students and alumni. It’s like we’re a big international family, or rather a group of people, brought together from all over the world, having a common disease – being absolutely and dangerously in love with the place, at which we studied hard, partied even harder, dreamed wild and strived to make a difference.

I would also like to thank you for providing an inspiring and artistic atmosphere through music and theater stages, exhibitions, literary and photography magazines. You are giving all of us the opportunity to overcome our fears, to stand in front of thousands of people and act, dance or sing the songs of our lives.

Thank you for making our dreams come true! Most of all, I want to thank you for showing me that the world does not end by my door, that people are equal, no matter where they come from, that nothing is out of reach as long as you make the effort to stretch your hand and grab it. Thank you for giving me the confidence to strive for success and demand only the best! Thank you!

There are always two sides to every story. Well, this was mine. And here are the pure facts:

The American University in Bulgaria opened doors in 1991 with 16 full-time faculty members and 208 students. It was a result of the joint efforts of USAID, the Open Society Institute, and the Bulgarian local and national government.

The idea of the founders was to establish a private, selective, liberal arts university, whose mission was to educate students of outstanding potential in a community of academic excellence, diversity and respect and to prepare them for democratic and ethical leadership in serving the needs of the region and the world. The AUBG campus in Blagoevgrad in the spring. Photo by AUBG

In 2001, AUBG received accreditation by the New England Association of Schools and Colleges (NEASC) and by the Bulgarian National Evaluation and Accreditation Agency.

The university received the highest accreditation evaluation by the Bulgarian National Evaluation and Accreditation Agency in 2006.

AUBG receives subsidy neither from the Bulgarian government, nor from the US. It is funded by donors (two of the largest ones being the Open Society Institute and the America for Bulgaria Foundation), gifts, grants and tuition. The student body of AUBG is uniquely diverse even for US standards. Photo by AUBG

AUBG is situated in Blagoevgrad, a student-friendly city in southwestern Bulgaria with a population of 76,700 people (as of 2010). It is located in the valley of the Struma River at the foot of Rila and Pirin Mountains, 101 km south of Sofia, close to the Greek, Serbian and Republic of Macedonia borders.

Blagoevgrad features a pedestrian downtown with preserved 19th century architecture and numerous restaurants, caf?s, clubs and boutiques. As one AUBG professor once said, “Blagoevgrad is the best university town – there is not much to distract you from your studies.”

The first residence hall, Skaptopara I, opened doors in 1998, followed by Skaptopara II and III, which are functional as of 2002 and 2010, respectively.

Almost 20 years after its establishment, AUBG has about 1100 students from 40 nationalities, 43% of the students are Bulgarian, 57% are international. In 2010, there are 70 faculty members, three resident campuses, and New Academic Building.

The New Academic Building also includes the Panitza Library, which houses the largest English language collection on the Balkans. It is a modern library with 100,000 books, more than 10,000 print and electronic journals, videos and DVDs, audiotapes and CDs, and many databases in support of curricula and general educational programs.

AUBG was recently announced one of the best universities in the first Bulgarian university ranking system. It topped the chart with its all five academic programs that were listed - Economics, Business Administration, Computer Science, Political Science and Journalism and Mass Communications, with Economics rated as the best one in Bulgaria.

In addition to its undergraduate program, the university also started an Executive MBA program in 2003. The EMBA classes take place at the Elieff Center for Education and Culture in Sofia. The program is 16-month, four-term master’s degree, designed to expand the capabilities and perspectives of already successful managers and prepare them for executive positions in their organizations. What lies ahead for AUBG? This is what the university President David Huwiler has to say about that:

“This year we will begin construction on the 10,000 square meter Student Center, which will include a full gymnasium, performing arts center, fitness center, caf?, etc. Then the next (and final) big project will be a new Academic-Administrative Building. We are also working on outdoor athletic facilities.

But even while we are finishing the campus, there are other goals: we want to continue to increase the number of students on campus to about 1400. We will reach the target within three years.

Finally we want to increase the amount of financial support that we can offer to top students. We have started a fundraising campaign, and one of the most important goals will be to offer more financial support to outstanding students both from Bulgaria and elsewhere,” Huwiler said.

Can the American University in Bulgaria – a unique combination between Bulgarian environment and US educational traditions – compete with the finest academic institutions in the world? Time will tell.