Black Sea Oil Rush - Why Not in Bulgaria? 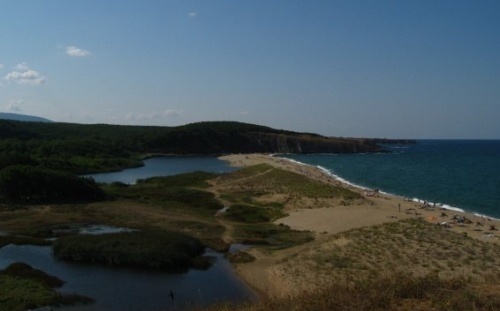 The Southern Bulgarian Black Sea coast near the village of Sinemoretz. Photo by Ognian Kassabov

2010 has been marked by a noteworthy development which saw major oil companies – spearheaded by American ones – turning their gaze towards the largely untapped oil sources of the Black Sea.

Oil in the Black Sea – a rapid development

In what is maybe the most spectacular deal, in June US giant Chevron teamed with Russian colossus Rosneft to create a joint venture to explore Russian Black Sea waters. The Romanians were not far behind, and after resolving a shelf dispute with neighboring Ukraine, swiftly moved to give no less than 5 permits over the summer to a number of companies, including once again a Russo-American consortium, this time between Lukoil and Vanco. Ukraine itself is claiming it has some 90 oil and gas structures, with about 20 of them ready to be developed.

But the most extensive and significant development has been seen in Turkey, which in recent years has been able to allot all sectors of its Black Sea waters – both shelf and deepwater – to different companies, including US greats Exxon and Chevron, but also to companies such as Brazil's Petrobras and Turkey's own TPAO.

Apart from the general rush toward the Black Sea, which some commentators have dared to label "the new North Sea," two observations force themselves. First, the drive of US companies to the Black Sea, such as for instance Chevron, who have also expressed interest in developing non-underwater gas resources in Romania and Bulgaria. Second, the fact that American entities are not shying away from joining forces with Russian companies, even state-owned ones like Rosneft. Whatever the strategic rivalry between the USA and Russia in the Black Sea region, things cannot be as simple as they appear at first sight.

Of course, another issue that becomes pressing is Bulgaria's manifest absence from this picture, especially in the light of the conscious efforts of its Black Sea neighbors. For the time being, no oil has been extracted or significant deposits proven in Bulgarian waters. UK company Melrose extracts some modest amounts of natural gas from three shelf sites near Kavarna.

Yet, as a matter of fact, a bid was announced in March 2010 in the Official Journal of the EU for exploration in Bulgaria's southern Black Sea sector (so-called Silistar block). The contest was initially thought to be exciting, with major companies like Total, Statoil, and Americans Anadarko expressing interest. But in the end, only four smaller companies actually applied.

There were different reasons brandied by Bulgarian media for this development, including deadlines that were allegedly too short for a major companies, or the geological terrain being not the right kind.

According to Diana Yaneva, director of the Underground Resources and Concessions Directorate at the Bulgarian Ministry of Economy, Energy and Tourism (the entity in charge of bids for exploration and drilling permits), who spoke to this site, the actual reason was that the area did not seem lucrative.

"Major companies gave up because of unsatisfactory results in the initial investigations they conducted after the launch of the bid," said Yaneva.

She added: "Those are companies with considerable resources and their expectations are for a large deposit, in order to build infrastructure for processing and sale of end products. At this point no such deposit has been found in that area of the Black Sea."

Yaneva especially stressed on the fact that the energy ministry had led an extensive correspondence with the oil majors and that they have confirmed giving up "because of insufficient geological data and the big risk associated with the investment."

As a side detail, the Underground Resources director revealed to Novinite that the Silistar block had not been adequately carved out and as a result is non-homogenic, as it includes both shelf and deepwater areas. She specified that the officers responsible for this error have been fired from the ministry.

In view of the fact that the tender is yet under progress, the larger Bulgarian companies bidding refrained to comment when contacted by Novinite.com (Sofia News Agency). Among them is Overgas, a Gazprom-controlled Bulgarian gas distribution company, which has already ventured in gas prospecting and drilling. Another is Prouchvane i Dobiv na Neft i Gaz (PDNG), the heir to the old state-owned oil and gas communist-era company, which is the largest – and until recently the sole – Bulgarian extractor of hydrocarbon fuels (and is owned by the Chimimport conglomerate).

The Bulgarian government is expected to vote to determine the winner from the bid within the next couple of weeks.

Of course, when talking about underwater drilling  – especially deepwater drilling – the Gulf of Mexico catastrophe cannot but come to mind.

The Deepwater Horizon spill of hundreds of thousands of barrels of crude oil in the Mexican Gulf, April-August 2010 drew the stunned attention of the world and American authorities alike. EU Commissioner on Energy G?nther Oettinger even recommended member-states to halt all further concessions for deepwater oil development until a full investigation has been made of the case and until EU regulations are reviewed and improved where needed. Even Russian PM Vladimir Putin has made a special case of his stern requirements to the Chevron-Rosneft venture to ensure the environmental safety of its projects.

Of course, Bulgarian PM Boyko Borisov has not missed the opportunity to make light of the situation. When he wanted to express his hostility toward the Burgas-Alexandroupolis oil pipeline project, which involves the unloading of oil on buoy system in the Burgas bay on to a pipe to Greek port Alexandroupolis, Borisov freely played the environmental card. He even explicitly brought up the Gulf of Mexico scenario, stating his abhorrence lest that should happen to Bulgaria. Of course, the actual underwater exploring bid has not been suspended.

Bulgarian environmentalists have been somewhat slow to react, but for instance the Green Party of Turkey are currently developing a Working Paper on Oil Drilling in the Black Sea and have taken up a number of initiatives with respect to the Turkish government.

Apart from the general hazards of deepwater drilling, environmentalists have pointed out some special features of the Black Sea which might render a potential spill even more damaging. Crucial among them is the fact that the Black Sea is relatively very small, and is moreover quite closed, being joined only via the narrow Bosphorus to the Mediterranean – some thousands of miles from the world ocean. A potential spill might take quite some time to clear, they say.

Of course, no such things can be allowed to happen in the Black Sea, which is already one of the world's most polluted. Purely environmental concerns aside, any oil-related mishap might prove ruinous to the Bulgarian tourism industry, which has a significant share and is of course strong especially on seaside attractions.

Bulgaria must yet again make a wise choice for economically viable and sustainable, as well as environmentally friendly development. The past has proven that it does not always make such choices very well.