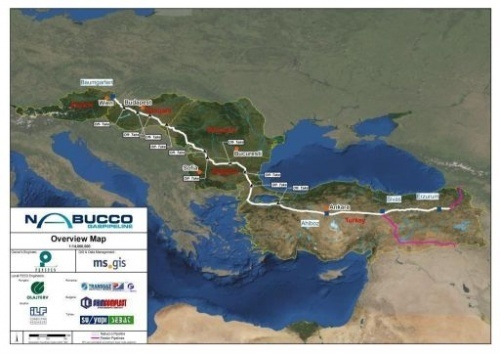 The announcement of Turkmenistan that it is ready to provide natural gas for the Nabucco gas transit pipeline is a "remarkable step," according to Christian Dolezal, Spokesperson of the Nabucco Consortium.

After at the end of last week Turkmenistan announced it was ready to provide the project with more natural gas that it can handle, on Thursday Dolezal commented in Sofia that the statement of Turkmenistan's First Deputy Prime Minister Baymurad Khojamukhamedov is very promising, and that the Nabucco Consortium is convinced that it will strike a supply contract with Turkmenistan.

At the present the project company is involved in talks with the European Bank for Reconstruction and Development, the European Investment Bank, and the International Finance Corporation, a member of the World Bank Group, asking for an EUR 4 B loan. These negotiations are expected to be completed in 2011.

The construction of the Nabucco gas transit pipeline will start in 2012, and the first natural gas deliveries through it should be a fact in 2015, he explained.

From that, the direct investments in the Bulgarian economy from the construction of Nabucco will be about EUR 400 M and a few hundred jobs. Another about 1000 jobs will be created indirectly by the project.

Despite the neat timeline for the construction and entering into operation of Nabucco, Dolezal indicated that 2011 will be key for the project because this is when the first contracts with the natural gas suppliers will be signed by the consortium.

The Nabucco gas transit pipeline is supposed to be ready by 2015. Mitschek has made it clear that the project company is certain of Bulgaria's commitment. He has also expressed confidence that the European Bank for Reconstruction and Development (EBRD), the European Investment Bank (EIB), and IFC - a member of the World Bank Group, will support the project with respect to finding funding.