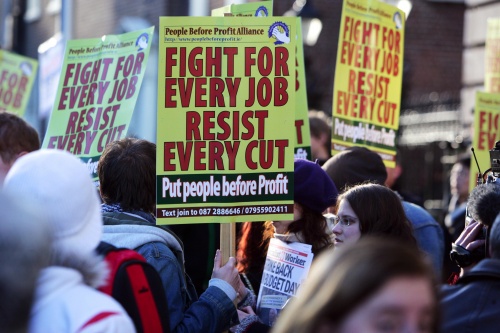 Protesters gather outside at Goverment Buildings, Dublin, 24 November 2010. The Irish government has unveiled a range of tough austerity measures designed to help solve the country's debt crisis. Photo by EPA/BGNES

By Colm Heatley and Elliott Gotkine

Even before Irish Prime Minister Brian Cowen announced he was seeking the help of the European Union and the International Monetary Fund—and dissolving the government—the Irish were intent on passing an austerity budget by yearend. The EU and the IMF, which may extend to Ireland emergency loans of as much as ?85 billion (5 billion), couldn't ask for a more compliant patient—except in one area.

The Irish credit much of their pre-crisis economic success to a policy of charging corporations only 12.5 percent in income tax, one of the lowest corporate rates in Europe. That rate, which compares with 28 percent or higher in Britain, France, Germany, and the U.S., has lured multinationals to set up manufacturing, research, and service centers in Ireland over the last 20 years.

Now various officials in Europe are calling on the Irish to raise funds by hiking taxes. Olli Rehn, the EU's economic and monetary affairs commissioner, has stated that Ireland cannot be a low-tax economy anymore. French President Nicolas Sarkozy has said that while it's not his business, he could not see how the Irish could avoid hiking the corporate rate. Various members of German Chancellor Angela Merkel's ruling party have said Ireland should consider raising the corporate rate.

The Irish are pushing back. Deputy Prime Minister Mary Coughlan told Parliament on Nov. 18 that the 12.5 percent rate was "non-negotiable." Supporting the Irish are the multinationals. The American Chamber of Commerce in Ireland backed by Bank of America Merrill Lynch (BAC), Hewlett-Packard (HPQ), Intel (INTC), and Microsoft (MSFT) warned the IMF, the European Central Bank, and the European Commission of the "damaging impact" on Ireland's "ability to win and retain investment" in the event that corporate taxes go up. "HP is very clear," Lionel Alexander, head of Hewlett-Packard's Irish operations, told Bloomberg Television. "If the tax rate increased, we would be relooking at our investment in Ireland."

Hewlett-Packard employs more than 4,000 people in Ireland, and multinationals' operations account for about 70 percent of the country's exports. "It would be counterproductive to raise taxes in the current environment," says Sylvain Broyer, chief euro-region economist at a bank group, Natixis, in Frankfurt. "They might have to adjust tax rates at some point but not during an emergency situation. It would be a grave mistake."

Adding to the tension is the long history of criticism directed at Ireland by other EU member states for adopting a low-tax strategy in high-tax Europe. While France and Germany have stuck with high rates, new EU members—including Bulgaria, Cyprus, Latvia, and Lithuania—have adopted the Irish model. How Ireland adjusts its taxes has implications far beyond its bailout.

The bottom line: Ireland is balking at hiking corporate taxes as a condition of an EU-IMF bailout. It credits its past economic success to low taxes.