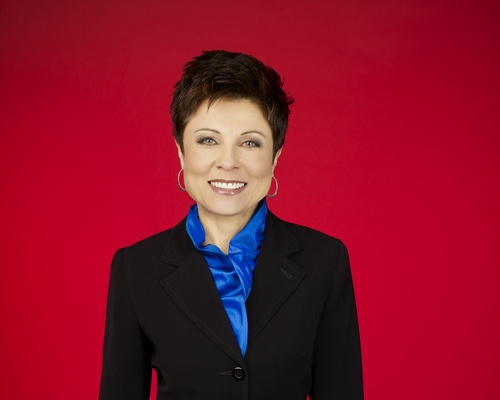 Ralitsa Vassileva is perhaps the most successful Bulgarian journalist internationally. She is an anchor for CNN International. Based at the network's global headquarters in Atlanta, she anchors World Report.

Since she assumed her duties at CNN International in 1992, Vassileva has anchored coverage of many major international news stories including most recently Israel's withdrawal from Gaza and the death of Abu Musab al-Zarqawi. In addition to her anchoring duties, Vassileva has reported in the field from places like Moscow, Jerusalem and the United Nations.

She was on the air during CNN's coverage of the conflicts in Kosovo and Bosnia Herzegovina, the ongoing conflict in the Middle East, Russia's transition to democracy, Northern Ireland's peace agreement, the fall of Indonesia's President Suharto and East Timor's struggle for independence. Vassileva has also covered the UN weapons inspection crisis in Iraq, the September 11th attacks on the United States, the war against terrorism and the ongoing war in Iraq.

Vassileva began her career at CNN as anchor of CNN World Report, the world's only forum for international broadcasters to present news from their country before CNN's global audience.

Before joining CNN, Vassileva was an anchor and reporter for the Bulgarian National Television (BNT). In this role, she helped develop a post-communist approach to news delivery and later became the country's second highest-rated anchor. She joined BT full-time in 1990 as a national reporter.

Vassileva's interest in journalism began after she joined Bulgarian National Radio's English language service in 1987 as an English translator and announcer where she would later add reporting to her duties.

Vassileva was born in Sofia, Bulgaria, and was educated at English language schools in Sofia and New Delhi, India. She graduated from Sofia University with a major in English and literature and a minor in Bulgarian and literature.

In 2007. the American University in Bulgaria awarded Vassileva an honorary degree Doctor of Humane Letters for her contributions to journalism.

"Ralitsa Vassileva happens to be one of my favorite in the entire newsroom. I thank Ralitsa Vassileva, she brings a richness and understanding to CNN International that we absolutely love. You gotta understand, Ralitsa is Ralitsa. She is one of our favorites," fellow CNN anchor Jim Clancy said about Ralitsa Vassileva in an interview for Novinite.com (Sofia News Agency).

You have been a top CNN anchor for some two decades now. What is the greatest thing about your job? What is the thing you are sorry you had to give away or give up because of it?

The greatest thing about any job is when you find one for which you have a genuine passion. For example, I would be following the news, even if I didn't work as a journalist... I can't stay away from it! Another great thing about my job is that it provides an important service to people worldwide.

As to regrets, most journalists will tell you, journalism costs you family time, sleep and social life. News never takes a break. To keep up with it you have to work at odd hours, even when the rest of the world is celebrating, sleeping or having a good time. But the time I lost with my son due to working weekends is my biggest regret.

What would you say has been the highlight of your CNN experience so far, i.e. which report or project of yours have you found the most rewarding?

There are so many, but on a personal note, the one that I found most rewarding was the documentary I did regarding Bulgaria's 20th anniversary of the fall of communism. It gave me an opportunity to revisit the story that made me a journalist.

It was fascinating to meet with major players in that revolutionary event and see where they stand today. What struck me the most though was talking to those who have no memory of what happened 20 years ago.

Of course, there are money restraints, but no political restrictions. The government can't stop them from pursuing their dreams...The sky is the limit and that's the best outcome of what happened 20 years ago.

(My visit last December impacted me so much I wrote a Blog about it. http://inthefield.blogs.cnn.com/tag/ralitsa-vassileva/ )

What has been the "toughest" situation for you as an anchor/reporter? What is "the best" news you ever reported?

The toughest situations are those dealing with meaningless death, pain and destruction. Whether it's terrorist attacks, natural disasters or airplane crashes, those are the toughest moments to be a journalist. You have to stay focused to cover the news professionally and give in to your personal reaction once you're off work.

Some of the best moments are those of human triumph over adversity, like the recent Chilean Miner rescue. It could have turned out so tragically but 33 miners emerged from the depths of the earth alive! For 17 days no one knew where they were and they didn't know if they would be found.

And then there are the stories that leave you in awe of human nature. I will never forget covering the story of a computer scientist who left a high-paying job at IBM for a chance to help severely disabled children lead productive lives. The amazing children who benefited from his inventions were a true inspiration. I learned so much from them...

As part of your job you are constantly "watching" the world much as the world "watches" you. When you joined CNN in the 1990s, the United States and the West were the jubilant victors of the Cold War, ushering into a new, Global Age, marked by globalization and democratization. 9/11 and the subsequent events changed this triumphant view of the world. Where do you think things are going globally? From your point of view, how should one make sense of today's world?

The Internet and high technology have truly revolutionized the post Cold War world in ways we're yet to fully comprehend. Technology is leveling the playing field and breaking down all sorts of barriers.

It is the polar opposite of the Cold War world divided by an Iron Curtain. The future belongs to those willing to put in the hard work and find ways to prosper no matter where they live or what their social status is.

CNN could be described as an epitome of globalization. Do you think it is a good idea for the world to become "more American"? If so, in what way(s)?

In today's world I don't think anyone can impose any specific trend or culture. It's a marketplace of ideas and the best ones win popular support. Just today I was reading the reaction of an American CEO to the fact that China has taken the lead in "green" technology.

He was suggesting the U.S. can stay ahead by investing in the next big thing, like nano-technology, to keep up with global competition. That's what drives innovation -- healthy competition.

A lot of countries advertise themselves on CNN. What do you think is needed for a country to have a successful CNN ad, or is any ad on CNN beneficial by default?

I think that's for each advertiser to decide, but CNN has a global reach so it offers them a big advantage to reach a global audience if they want to expand their customer base.

There has been a public debate in Bulgaria on its self-advertising on international TV channels. Some have remarked that the best possible ad for Bulgaria would be if every time Ralitsa Vassileva is on screen, there is an inscription saying she is from Bulgaria. Such witty ideas aside, what do you think would be the best way to advertise Bulgaria on international TV channels such as CNN?

You can't go wrong by focusing on the country's natural beauty, business opportunities and cultural achievements over a long and turbulent history.

What is the feeling to be a CNN anchor and report news about native country? Is there any time you were especially moved by the news about you are reporting? What kind of "Bulgarian" news make it to the CNN screen?

CNN is a global newscaster so stories about Bulgaria and other countries are judged partly on their impact on the world.

For example, Bulgaria was on CNN in the documentary I did on the fall of communism, as part of a series on a revolution that affected the world. I have also done stories on Bulgarian elections, folk dances and archeological discoveries. But there's a world of news competing for the usual 22 minutes in a half hour newscast.

Is it safe to say that you have realized your dreams? What do you strive to achieve from here on?

I still can't believe my good fortune, to have been formed as a journalist by the fall of communism, mentored and supported by wonderful Bulgarian journalist colleagues and my abilities recognized by a global broadcaster like CNN which gave me an amazing opportunity to keep growing as a journalist. So the past 20 years still feel like a dream, I still go to work looking forward to sharing with my audience my passion for the ever-changing world of news. Still living the dream...

Do you ever see yourself living in Bulgaria?

In a way I never stopped living there...I am still partly there through my family and friends...